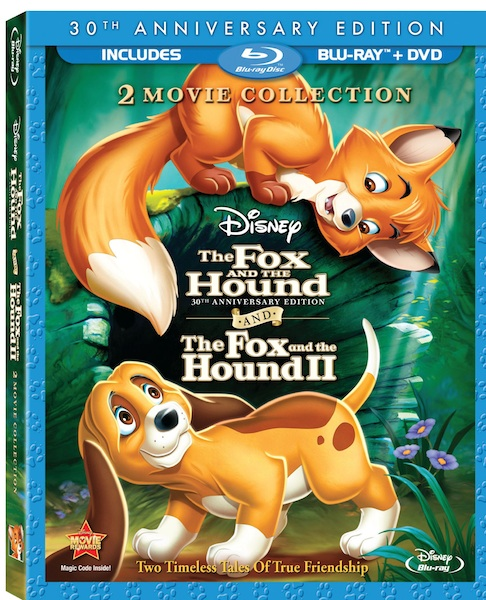 I love when I get to review vintage Disney animated films from my childhood.  It always takes me back to that time when I set in front of the old tube tv with  my VHS and watched away.  Disney has opened their vault to release the classic ‘Fox and the Hound’ film which is packed with the direct to video sequel ‘Fox and the Hound 2’.  The combo pack includes both the blu-rays of both films and the DVD versions.  It was such a treat to see this film again and to see the sequel.  Another great addition to the Disney line of Blu-rays.

‘Fox and the Hound’ – “When Tod, an orphaned fox cub meets Copper, a coonhound puppy, they make a pledge to be lifelong friends, not realizing that Copper is being groomed to hunt wild animals, including foxes.  Copper spends the winter with his owner, Slade, and an older dog, Chief, tracking animals at a remote cabin. When they return, a lonely Tod eagerly greets his old playmate but is stunned when a reluctant Copper joins Slade and Chief to chase Tod through the forest.  During the pursuit, Tod escapes but Chief is seriously injured.  Seeking revenge, Copper hunts down Tod only to find himself confronting an even bigger enemy, which he and Tod must face together.” 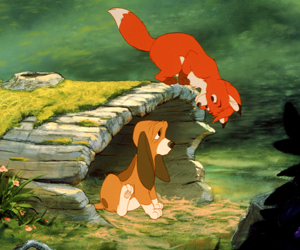 ‘Fox and the Hound 2’ – “In The Fox and the Hound 2, music takes centerstage as Tod contemplates joining up with “The Singin’ Strays,” a group of harmonizing dogs appearing at the local county fair but dreaming of hitting the big time at the Grand OleOpry.  While Tod does his best to fit in with his new friends, Copper finds himself relegated to “roadie,” a position he begins to resent.  With the encouragement of Dixie, the “diva” of “The Singin” Strays,” Copper manages to sabotage an important audition.  The next day, their differences forgotten, Copper and Tod team up and, using Copper’s superior tracking skills, they locate the Grand Ole Opry talent scout who signs “The Singin’ Strays” (minus Tod, who chooses his friendship with Copper over fame) on the spot.”

I really enjoy the original film.  Hearing Kurt Russell and Mickey Rooney voice the dogs are something quite spectacular.  If you have kids yo must show them this film.  They will treasure it forever.  The sequel, I really didn’t care much for.  It was okay, but not my cup of tea.  The sequel is not so much a sequel as it is a “mid-quel”.  The film takes place during the first film as Tod and Copper are growing up into adulthood.  It is in an interesting concept, but ultimately I didn’t enjoy it too much.  The kids will definitely enjoy it.

Both films have AVC MPEG-4 encodes at 1080p which are stunning.  The colors and backgrounds are fantastic.  Very smooth and rich all over.  The original, being 30 years old has some flaws and some noise here and there, but it does not take away from the viewing experience whatsoever.  I was actually surprised to have both films on one single disc.  I think this is becoming the norm, but I am all for spacing out your films and letting the ultimate and best quality take over, rather, than cramming everything onto one disc.  And of course the direct to video was made a few years ago, so this has some better video quality to it compared to the original.  But overall, it is a wonderful video transfer.  The Fox and the Hound – 1.66:1; The Fox and the Hound 2 – 1.78:1.  The audio has a DTS-HD Master Audio 5.1 track on both films and sounds pretty great.  This animated film doesn’t really support a full sound for your system, but for what it is, the sound does its job.  The dialogue sounds great and clear for the most part, but there is very little usage of the rear speakers for anything really.  And of course part two being made much later on than the original sounds better. 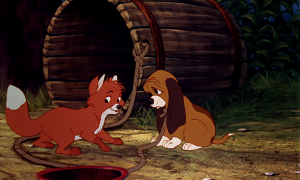 young and old and even develop between different species!

· The Fox and the Hound:

o “Best of Friends” Sing-A-Long – Viewers are invited to sing along with Pearl Bailey on this Walt Disney Classic Song.

o Passing the Baton:  Making of The Fox and the Hound – This feature allows fans to take a deeper look at this little bit of Disney history as legendary animators hand over the reins to a new        generation.

o The Making of the Music – Music is the center stage in The Fox and the Hound 2.  As such, this feature showcases how the songs in the film were created with Reba McEntire, Trisha Yearwood and      some of the hottest performers in Nashville.  Viewers will further discover how animation and music work together to further enhance a classic story.

This is truly a great release.  I’m glad the new generation will get to experience this classic tale of friendship.  ‘The Fox and the Hound’ is a remarkable film and great animation.  It will be treasure still for years to come.  This is the best ‘Fox and the Hound’ has ever looked and sounded.  It has its flaws, but it definitely does not take away from the viewing experience.  The extras are a joke.  This is what happens when you try to cram too much information on one disc.  Disney should have made another disc for each film or a second disc for just extras.  This set is definitely worth getting for the original film.  Kids will probably enjoy the second film, but not likely the older people.  But overall, this is one to get and enjoy for years to come.