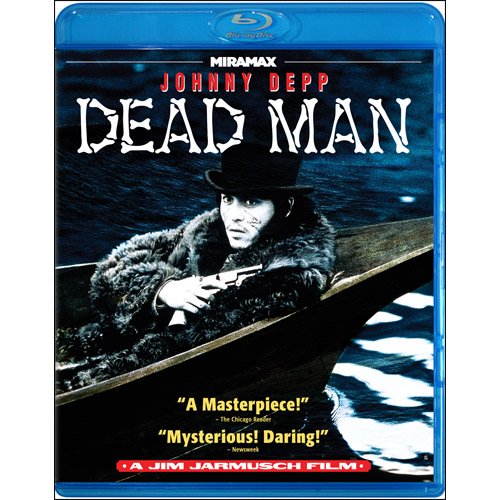 ‘Dead Man’ might be my favorite Jim Jarmusch film.  Yes, better than ‘Coffee and Cigarettes’, ‘Broken Flowers’, and ‘Ghost Dog’.  The cast of ‘Dead Man’ is amazing with its lead being super star Johnny Depp.  Some think this is a western film.  I like to think of ‘Dead Man’ as the ultimate experimental western.  ‘Dead Man’ is simple and plain AWESOME.  This movie has everything going for it.  The acting, the story, the filming, the story, and the characters.  They all come together to erupt a truly creative and brutal film.  Highly recommended.

We are introduced to William Blake (Johnny Depp) who is an accountant who is moving to a far away town for a new job as a bookkeeper. Once William arrives in the new town and checks in with his new job, he is told they have already hired somebody and they force him to leave.  This puts William with no home, no friends, and no money in a strange new town.  Sooner than later, William meets Thel, a former prostitute with a heart of gold.  The two hit it off and she takes him in.  But unfortunately, an ex-boyfriend of Thel’s shows up seeing William and Thel while they are in bed and the ex boyfriend shoots William in the chest wounding him.  As Thel’s ex tries to finish the job, Thel shields William with her own body and the ex kills her.  William barely holding on to life manages to get one shot off killing Thel’s ex.  After William escapes, Thel’s ex boyfriend’s father, who is a prominent man in town, hires a few assassins to hunt and kill William.  Blake wakes up to see an American Indian trying to repair and take out the bullet from William’s chest.  But, the bullets is lodged too close to his heart and if it is removed, he will die.  The American Indian calls himself ‘Nobody’ and tells William the bad news and that basically he is a dead man walking.  When ‘Nobody’ discovers William’s whole name, he thinks that William is the reincarnation of another William Blake who is ‘Nobody’s’ favorite poet and decides to take him to a river so he can return to the spirit world in peace.  ‘Nobody’ also discovers that William is being hunted.  This prompts ‘Nobody’ to go completely insane ninja crazy by trying to kill all the white men he can that are necessary.  As this is going on, the posse that was hired to hunt and kill William has dwindled from three to one for the fact that one of the assassins killed the other two to hunt and kill William alone.  This lone assassin even eats one of his co-assassins.  HARDCORE!!  It is here where ‘Nobody’ tells William he needs to go on a vision quest or rite of passage to find oneself spiritually and morally.  From here, William finds that even though only when he is surrounded by death is he truly forced to live.  I’m not going to give the film away, but it is tragically satisfying.  What an amazing movie ‘Dead Man’ is.  Get this movie.  Watch this movie.  Love this movie. 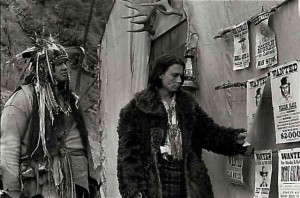 ‘Dead Man’ has a 1.78:1 AVC-encoded transfer.  This has been cropped from its original 1.85:1 print.  I’m not quite sure why this is the case, but it is noticeable in some of the night time scenes and in the darker lit scenes.  Now that being said, this is by far the best ‘Dead Man’ has ever looked.  The image is much brighter than its previous DVD release and everything seems to pop much better.  I wish this beautiful film was more on the demo worthy side.  The audio is a sad and lonely stereo 2.0 DTS-HD mix.  Don’t get me wrong, it sounds AMAZING, but I want the full speaker experience with this film.  It needs it.  Plus there is just something awesome about hearing a Neil Young’s soundtrack in 5.1, but sadly I don’t get that here.  But that is just me wanting more sound.  It sound magnificent on the stereo 2.0 mix.  It’s dialogue is crystal clear, but I really wanted more. 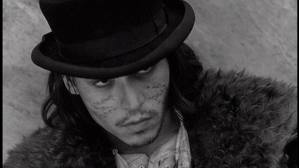 – Deleted Scenes – There are fifteen minutes of deleted scenes here which were better let on the cutting room floor than in the film . Nothing really spectacular or life changing here.

– Music Video – This is more of samples from Neil Young’s score of the film with images of the movie in the background.  Not a worthwhile extra.

‘Dead Man’ is an instant classic and should be in anyone’s top western films.  Kim Jarmusch really knocked it out of the park with this movie.  Johnny Depp, Gabriel Byrne, Crispin Glover, Lance Henricksen, and Alfred Molina all do an amazing job acting in this movie.  That’s one hell of a cast right?  This blu-ray is definitely a step in the right direction for what this movie deserves.  I wish the film was presented in its original aspect as well as a 5.1 DTS-HD mix.  Also I want tons of extras with this movie.  I’m sure there wil be a future ultimate edition of this film.  Until then, I am happy with this version.  Highly recommended.  Get this movie!  It will rock your world.

Or purchase the film from Amazon below!!