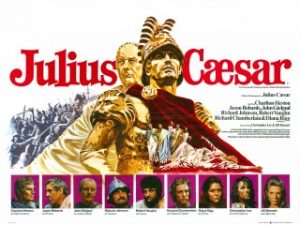 Warner Bros. is wanting to purchase a project on ‘Gaius Julius Caesar’ based on a story pitch.  They are wanting Chris Boal to write and Jonathan Liebesman to direct.  Boal really hasn’t done anything besides work on a press kit and Libesman is responsible for such disasters as ‘Battle: Los Angeles’ and ‘Darkness Falls’.  And supposedly they want a different original version of the story with a major star to play Caesar.

It is said: “it’s an original pitch that is not a biopic as much a Patton-like approach that covers the time in which Caesar was sent to Spain on a detail no one else wanted. There, he built the 10th Legion fighting force that would eventually march on Rome, overrun the forces of his close friend turned rival Pompey, and establish Caesar as the unrivaled ruler of the empire. The idea is to create a sweeping drama with a big movie star part, and the pitch came with some of the action scenes choreographed. The film would end with his coronation but leaves open the prospect of a second film that chronicled his trip to Egypt and eventual assassination.”

The writer Chris Boal is the brother of Mark Boal who wrote ‘Hurt Locker’.  I can’t make this up.  Not sure how this will turn out, but I’m guessing AWFUL.  I’m sure Brad Pitt will be a shoe in for this role.