SPARKY SHAGWELL TELLS US ABOUT THE 6TH EPISODE OF ‘PRETTY LITTLE LIARS’!!! 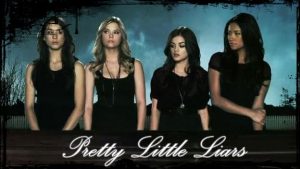 Evidently there is a yearly fashion show headed by Allison’s mother (Jessica) that has never been mentioned until, well, the day before it happens? Way to lay the groundwork for this little plot point.

The 4G’s are folding programs for the fashion show and re-hashing the previous events. Death, murder, kill, liars, break-ins, funerals, sister hating… the list goes on and on.

These are the facts:

– Melissa and mom bought tickets to “Out of Town”.

– “A” is boring me and I am longing to find out who the hell she/he is.

– Spencer is not good at second fiddle.

– “Mona is five feet of insidious snark with a side ponytail…” thank you, Spencer.

The 4G’s have been vindicated with the death of Ian. Although, as we learned last week the suicide note/confession was a fake and made up of A’s texts to the girls.  So maybe the killer is still out there… bum bum bum….

So, Allison’s mom comes to town and asks the girls to wear her dead daughter’s dresses for the fashion show as a way creepy way to honor her memory. They glance awkwardly to each other but 4 bloody mary Momma is not noticing. They say yes and go about their day with the fancy clothes and weirded out mindsets.

Emily overhears her mom in the middle of what can only be assumed is phone sex with Mr. Texas.  She asks her dad to look at her essay and then hangs up. Mom is distressed and misses dad so Emily suggests mom moves to Texas and she stays in Rosewood until the end of the year. The idea is planted and the wheels are turning. Later, Samara – who is also a seamstress – is hemming dead Ali’s dress for the show. Emily goes to change and whoops, the dress falls down and she is naked, sans a pair of fierce, black heels. Wha? Samara then makes it known that she has a “friend” and Emily tells her to bring “friend” to the fashion show. Lesbian love triangle of jealousy…

Hannah and Caleb are back together and it is awesome. I love those two. Hannah’s dad is also back but still can’t get a grip on what he wants. I hope to Cthulhu he is sincere.

Aria and Ezra – nothing on them as he was, where you say? OUT OF TOWN.  Aria and Jason – I like the idea of them as a couple. As long as he is not, you know, THE REAL KILLER. Since Jason cannot remember if killed Ali, Aria tried to jog his memory by showing him pics from the day she died under the guise of picking memorial photos. Aria and Noel Kahn – the fucking creepy ex guy that wants to blackmail her and Fitz but now is dating Mona and is the DJ for the Fashion Show from Hell – he has the grin of the cat that ate the canary, or in this case – made a slide show of hate filled Ali photos.  Aria should not be able to make her own decisions any longer.

Spencer and Toby – still the perfect couple. Spence was bumped as head of the fashion show by Mona and I will admit that little Pocket Power Mona is pretty awesome. And highly annoying. Making the point that no one knew if Spencer was coming back or going to jail.

The Fashion show starts and it is great. Screaming Mona is a terror. Hannah is Pro Underage Drinking – looking for a bottle of champagne from the floor.  The girls hit the floor and while their catwalk skills suck they had a great time. Aria looked like a little Helena Bonham-Carter, Spencer was a Taylor Momsen-styled punk girl, Hannah was classic beauty and Emily looked statuesque and gorgeous. But you know Rosewood and if someone is having a great time, death and destruction and Avril Lavigne lyrics are not far behind. At that moment, the screen in the back showing the pictures of Ali turn into devil shots and horrible things start scribbling over her face. Oh well…  That is par for the fucked up course. After the show, the 4G’s turn around and see the power point light up saying “MY DRESSES, MY GAME, MY RULES!” They smartly leave, except Aria that needs to collect her large selection of strategically place Tresemme product. Creepy shows up behind her (Noel) and offers to give back HER disc of Ali and Jason comes to the rescue by breaking it. Creepy smiles and lurches away.

We end this installment of All My Liars with “A” shopping online for something diabolical….boots?

Things that make me go WTF????

– Who will Aria end up with when it’s over?

– Why is Melissa such a stuck-up bitch of a sister?

– Where is Out of Town and why is that the only place people visit from or go to?

See You Next Tuesday when more shit is dug up – literally.