Movie Company Buys Rights To Comedy Book ‘How To Defeat Your Own Clone’!!! 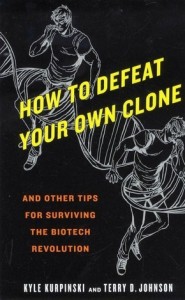 Dimension Films has acquired the rights to  the hilarious comedy book ‘ How To Defeat Your Own Clone’ by Kyle Kurpinski and Terry D. Johnson.  The book examines and details human cloning and the consequences of human cloning and how you can outsmart and defeat your own clone.

“The film would center on a clone-dominated society and one man’s quest to turn the tide back in favor of humans.”  “I’m excited to be working with Gotham and Ed Ricourt and feel this story has a fun and unique take on cloning that will be an entertaining movie for audiences,” Bob Weinstein said.

I’m curious to see how these movies play out.  I know there will be films based on similar titles such as: ‘How To Survive A Robot Uprising’, and ‘Zombie Survival Guide’.  Now with this clone one, I can only hope for some sort of mix between comedy and horror on all accounts, but who knows with Hollywood these days.  I’m looking to see if these will do well, and if it will spawn a series of these types of films.