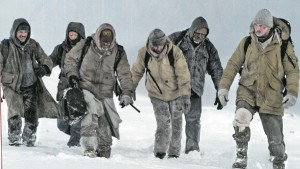 Open Road Pictures has acquired the rights to distribute Joe Carnahan’s thriller film ‘The Grey’.  Carnahan directed ‘Narc’, Smoking Aces’, and the recent ‘The A-Team’.  ‘The Grey’ is about a group of oil drillers whose plane crashes in Alaska, smack in the middle of the hunting grounds of a territorial rogue wolf pack.  Liam Neeson is in the film and supposedly is really badass in it.  Read the entire press release below.

In THE GREY, a group of oil-rig roughnecks are left stranded on the sub-arctic tundra after their plane experiences a complete mechanical failure and crashes into the remote Alaskan wilderness. The survivors, battling mortal injuries, biting cold and ravenous hunger, are relentlessly hunted and pursued by a vicious pack of rogue wolves. Liam Neeson plays the leader of the team, which also features Frank Grillo (upcoming Warrior and Lay The Favorite), Dermot Mulroney (Burn After Reading, About Schmidt), Dallas Roberts (“The Good Wife,” 3:10 To Yuma), Joe Anderson (Across The Universe), James Badge Dale (upcoming World War Z, The Conspirator, HBO’s “The Pacific”?), Nonso Anozie (upcoming Conan The Barbarian, Atonement, RocknRolla).

Ortenberg stated, “Joe Carnahan has done a phenomenal job of bringing this riveting story of the human condition to life. Liam Neeson’s performance is brilliant and I am thrilled to be working with Joe – and to be back in business with Mickey Liddell – on the release of the film.”

“Tom Ortenberg basically started me in this business, so to be working with him and his team at Open Road offers that rare thrill of reteaming with an old friend,” stated Carnahan. “I couldn’t engineer a better partnership for bringing THE GREY to moviegoers, guns blazing.”

Liddell stated, “Working with Joe Carnahan, Jules Daly and Scott Free was an incredible experience under extreme conditions. I would be happy to work with them anytime and anywhere but hopefully in warmer weather. I worked with Tom last year and saw his passion for film. We’re fortunate to be partnering with such a seasoned veteran in the business and I know he’s going to do an incredible job with this film.”

THE GREY is produced by Jules Daly, Joe Carnahan, Ridley Scott and Mickey Liddell. Executive producers are Tony Scott and Jennifer Hilton as well as Jim Seibel, Bill Johnson and Marc Butan of Inferno Entertainment.
The deal was negotiated on behalf of Open Road Films by Ortenberg, General Counsel and Executive Vice President of Operations and Business Affairs, Elliott Kleinberg, and Senior Vice President of Acquisitions, Ben Cotner. CAA, which packaged and arranged financing for the project, negotiated on behalf of the filmmakers.