Horrible Bosses – as reviewed by the Bossless CowDefender 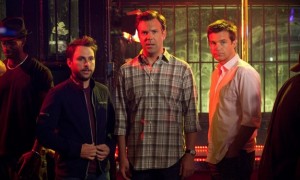 I went in expecting a slightly above average comedy. I am a huge Bateman fan and I have no issues with anyone else in this film. It exceeded those medium expectations. It was fairly consistently funny throughout and didn’t feel horribly derivative at any point. They kept it almost entirely above base (most rated R comedies seem to need to throw in a wet far at some point).

Each boss was a great monster. Spacey was dark, sinister, plotting and duplicitous. Aniston was sexy and relentless. Ferrell was a perfect tool and again shows that he’s a premier supporting actor. Keep him out of the lead, because this man is built for side roles. I’d even go so far to say that Ferrell was underutilized, even.

From the trailers I was skeptical about Charlie Day’s conundrum, being doggedly pursued by the very hot Aniston. In the movie, his friends friends shared in that skepticism. And they did a fine job dispelling my skepticism.

MF Jones (played by Foxx) was a joy to watch as the crushed underlings’ murder consultant. His few scenes really popped for me.

I wasn’t ever bored, but never busted a gut. There wasn’t much that I think will find traction in my brain as far as memorable quotes. But I surely enjoyed the film.

If you’re looking for a comedy, then this one is likely the best one playing at your theater. If you’ve seen Bridesmaids already then there’s no good alternative for you. Not a must see though.