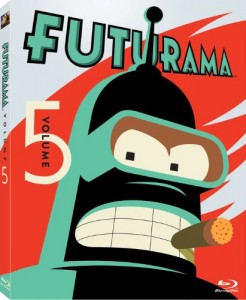 Today’s Geek Deal is for the ‘Futurama’ Season 5 Blu-ray.  The season 5 set in HD is currently 66% off.  It normally goes for $40.00.  It is now on sale for only $13.49.  Take advantage.  “You asked for more…and the Planet Express crew delivered! Welcome back to FUTURAMA, the light-years-ahead-of-its-time animated series from The Simpsons creator Matt Groening. Join Fry, Bender, Leela and the rest of the gang for 13 hilarious new episodes that tackle some of the most controversial subjects in the galaxy…including evolution, mind exchange, feline intelligence and robosexual marriage. Hey, it could happen!”