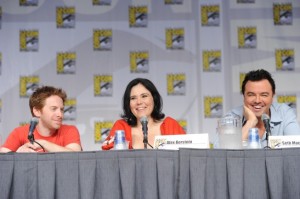 Executive producer of Family Guy, Mark Hentemann, introduced most of the ‘Family Guy cast at San Diego Comic Con today and showed a few clips of the new upcoming season and had the whole cast talk about what will be going on in the new season.  From what was said, there are a few big name actors lending their voices to the new season with what looks like some funny new story lines.

One of the clips shown had “Quagmire making a special trip to the Griffin home to wish Meg a happy 18th birthday – cut to scenes of him flirting, tickling her, making innuendos.”

Stewie and Brian will time travel back to the pilot episode, “bad animation and all” (MacFarlane).

There will be another “viewer mail episode.”

Someone tries to kill Chris, and Stewie runs away to live with worst maid ever, Consuela.

Alex Borstein chirped: “Lois is going to kidnap someone… she kidnaps a kid, on purpose.”

MacFarlane also said there will be a Family Guy movie. “We’ve actually had meetings about it, which makes it real,” but explained that the challenge is trying to put it together while running a series at the same time.

Now personally, I haven’t watched ‘Family Guy’ since the second season.  I just don;t find the show funny.  There are a few moments here and there, but not all that often.  I just can’t get into it.  I know tons of you love the show.