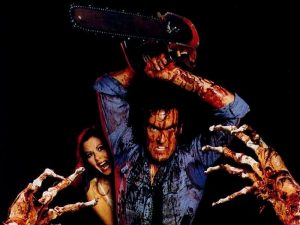 Sam Raimi and Bruce Campbell with Raimi’s Ghost House Pictures are officially prepping the most anticipated film of all time.  I am of course talking about ‘Evil Dead 4’.  And they have landed their their writer and director.  That person is Fede Alvarez.  Fede has not done anything really besides a few short films, so it will be interesting to see how this plays out, but with Bruce and Sam on board as producers, I’m sure it will be quite AWESOME.  I just hope the cast Ryan Reynolds as ASH.  He is perfect for the role.  Story developing….

To be Written and Directed by Fede Alvarez

Los Angeles (July 13, 2011) – Sam Raimi and original producing partners Rob Tapert and Bruce Campbell (who also starred in the original franchise) are gearing up to remake their cult sensation THE EVIL DEAD through their long standing Ghost House Pictures partnership.  Raimi and Tapert were such instant fans of Fede Alvarez’s short film “Panic Attack” that they set up a blind deal with the filmmaker and through that process have attached Fede Alvarez to write and direct the film. Alvarez wrote the script with Rodo Sayagues. Academy Award® winning screenwriter Diablo Cody is currently doing revisions on the draft. Ghost House is committed to renewing the franchise and has the film on the fast track.

Raimi, Tapert and Campbell will serve as producers.  Ghost House Pictures partners Joe Drake and Nathan Kahane will executive produce. Nicole Brown and J.R. Young will oversee the project for Ghost House. Lionsgate will handle international sales on the film.

The three producing partners commented, “We are committed to making this movie and are inspired by the enduring popularity and enthusiasm for the ‘Evil Dead’ series. We can’t wait to scare a new generation of moviegoers using filmmaking techniques that were not available to us thirty years ago as well as Fede bringing a fresh eye to the film’s original elements.”

Raimi wrote, directed and, along with Tapert and Campbell, produced the original horror classic THE EVIL DEAD that tells the story of five twenty-something friends who become holed up in a remote cabin where they discover a Book Of The Dead.  An archaeologist’s tape recording reveals that the ancient text was discovered among the Khandarian ruins of a Sumerian civilization.  Playing the taped incantations, the youths unwittingly summon up dormant demons living in the nearby woods, which possess the youngsters in succession until only one is left intact to fight for survival.  THE EVIL DEAD spawned a franchise with the equally successful installments EVIL DEAD II and ARMY OF DARKNESS.