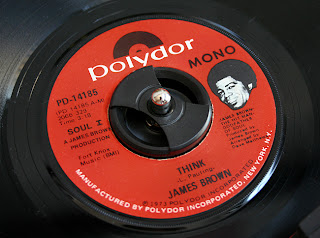 There’s no mistaking the fact James Brown is indeed the ‘Godfather of Soul’, the baddest mofo to ever ‘funk up’ the airwaves backed with one of the greatest rhythm and horn sections, ever.

Brown originally recorded this Lowman Pauling tune in 1960 with his band The Famous Flames, after the original version by The “5” Royales, however the version featured here is 5th version Brown and his band would record and release as a single. This version of “Think” is typical funky ‘make me sweat’ James Brown, which punches your ear gut with a blast of horns and bass from the get-go. The ditty charges the listener to reminisce and ‘think’ about the good times and bad, and what’s about happening on the streets. Clocking in at just over three minutes, this early 1970s recording still sounds as brilliant and relevant as ever, and holds its own as an authentic stand-alone version from the previous efforts. 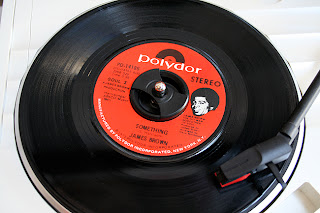 The real gem of this record, however, lies on the B-side. Brown’s version of The Beatles’ “Something” is one of the most interesting Beatles covers I’ve heard to date. Only a handful of rockers have made The Beatles’ songs entirely their own, and Brown owns this performance. Laced with Curtis Mayfield-like horns and vibraphone, this version could easily have been yanked right out of some hot-buttered-soul Blaxploitation film. Though the original recording by The Beatles is very much a love song, Brown’s version slips in and out of being a love song to one about inner struggle,  crying the added line of “I’ve got to believe in something!” Of course, it wouldn’t be a James Brown song without the interjected funk superlative, which the band does perfectly in this song, weaving their way back to a sensual arrangement that starts the song off.

If there is one person/band that should be in everyone’s record collection it’s James Brown. Most of his hits from the 1950s until his death in 2006 have been consistently good and uncompromising, and firmly established the funk idiom that every funk and soul musician who came after, turned to. Brown only got funkier in the 1970s as these two hits proved, which forever will make him ‘The Godfather’.