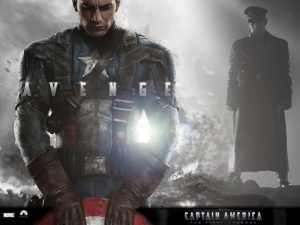 Don’t get me wrong, the movie was good.  We have the origin story of Steve Rogers, the kind hearted wimpy kid that would do anything to fight for his country.  Rogers is an idealistic, wholesome idea of the values of America, truth, justice, and the American way…wait, that was reserved for another comic franchise.

Perhaps Captain America could exist in the idealized 1940’s America, where America only fought for the rights of the oppressed, where anything not Hitler was good.  Where there was a battle worth fighting for and Indiana Jones was a hero.  This, the movie did very well.  We believe in Rogers’ good heart, even though we are constantly reminded of his good heart through characters constantly referring to him being a good person.  Perhaps this would have been slightly more convincing if we had more than one scene (which we’ve all seen in the trailer) showing Rogers sacrificing himself for the greater good.  Instead, we have a number of people constantly saying “you’re a good man, Rogers,” “stay a good man, Rogers,” “don’t ever become an asshole, Rogers”…ok, that last one was made up.

Speaking of 1940’s WWII America, the film LOOKS GORGEOUS!  Director Joe Johnson seems to have a bit of a hard-on for this time period, and it shows right on the screen.  The film has a throwback look and quality which I’m sure Johnson has been waiting to do since the early 90’s Rocketeer.  By the way, if I were a studio exec, I would go ahead and green-light a Rocketer revamp with Johnson at the helm.  The imagery is beautiful; you almost expect to see King Kong climbing the Empire State building in the background.  Also, the world’s fair, just brilliant.

This film has heart, and it tries to hit the heartstrings heavily.  Subtle humor throughout, from a kid making a quirky comment to the journey of Captain America trying to become a true American Hero, did make the audience erupt in laughter a few times. 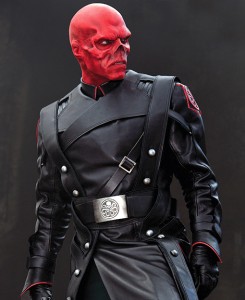 The action is also well done, though slightly underused.  There were certain a few great opportunities for mind blowing action that were reduced to an “America!  Fuck Yeah!” montage.  Or maybe it was a “Chris Evans is hot” montage.  Truth be told, the montage was pretty good, but the film was a bit slow paced up to the montage, and we could have used a bit more excitement earlier.

I’d have to say it’s the supporting case that didn’t pull through, aside from Stanley Tucci, who is always awesome, and Dominic Cooper as the ancestral Stark….they were just amazing, especially with the 1940’s time setting.  A good hearted German doctor who hates Nazis and, well, Howard Hughes.  The rest of the cast were hard to believe, especially Cap’ns rag tag of multicultural heroes that shared a camaraderie that  is most likely historically inaccurate.

All in all, I liked it, but it had the pacing of Michael Bay’s Pearl Harbor, and the equally irrelevant love story within it that ultimately kinda hurt the film.  Perhaps it’s mostly my cynicism that’s getting in the way of believing in Captain America when we live in a post 9-11, post Guantanamo and post Abu Ghraib society, where America is undefined somewhere between the images of MSNBC and Fox News butting heads.  When we are now old enough to realize that America in and of itself is not the idealized hero that Steve Rogers is, where politicians ultimately take the country’s name in vain in vicious attacks against each other, where we know that the country has committed its fair share of sins on local and international levels, where there is so much struggle between the classes and tensions abound, and a world where Sarah Palin actually matters to people (shudder).

Still, for the nostalgic view that we want to have of America where the Captain  and the country truly fight for good, it succeeds, and it’s a great setup for Joss Whedon’s Avengers (I’ll continue to drop Joss’s name everywhere I can), and I have a feeling somewhere in the back of my mind that Joss is going to spend some time having Rogers trying to reconcile his dreams and wholesome heart with the new millennium America that he finds himself in.  And if Joss isn’t considering this, maybe he and I should have a talk.

But yeah, props to Chris Evans, props to Joe Johnson, massive props to Stanley Tucci, but this film isn’t quite Iron Man…

Alright kids, go watch the movie now….it’s worth your time, and I’d love to know how everyone else feels about the red, white, and blue man.

One thought on “‘Captain America’….above Private America, but more like 1st Lieutenant America!!! (A Fedmex Review)”