Bryan Takes A Trip To The Zoo With A ‘Zookeeper’!!! (A Review) 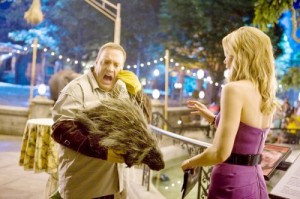 I can only describe my viewing of this film as 104 minutes of nails on a chalkboard.  It was painfully bad.  It’s not necessarily the actors, but rather the entire script, story, and voice acting.  This film has the lowest brow of humor and will probably mostly be enjoyed by five year olds.  The film reminds me of Dr. Dolittle and Night of the Museum in that the exhibits talk and are alive, and humans can hear the animals speak English.  A disaster on all levels.

As you have seen in the trailers, Kevin James plays Griffin, a zookeeper who loves his job and goes above and beyond to care for the animals at the zoo.  He is dating the hot Leslie Bibb who is out of his league looks wise and he proposed marriage to her only to have her reject him, because basically she is a materialistic bitch.  Cut to several years later where Griffin is still depressed about the whole rejection.  His brother is about to get married and while holding a pre wedding party at the zoo where he works, his ex who rejected him shows up and shows interest in him again.  Griffin wants her back in the worst way and is thinking about leaving the zoo to get a job that she wants him to have.  The animals at the zoo hear this and call a meeting and hence we hear that they can speak english.  They decide to talk to Griffin and help him out in the way they know how win the girl and ultimately stay at the zoo.  From here is a series of scenes of Griffin trying to win his ex back by taking advice from the zoo animals.  It’s all been seen and done before and is executed so poorly, that I wanted to shut my eyes.

The voice actors for the animals are all great actors, but their voices came across as the most annoying sound in film ever.  Every time Maya Rudolph (the giraffe) or Adam Sandler (the monkey) or Jon Favreau (the bear) spoke, I thought my ears were going to bleed.  It was such an unpleasant experience, that I question the people who will actually enjoy this film.

Now I like all the actors in this film.  I enjoy Kevin James, Rosario Dawson, Leslie Bibb, and Joe Rogan, but there wasn;t realy anything they could do with the garbage they were given.  The films reaches a point of absurdity that just completely loses its grip on all things relevant, fun, and entertaining.  This film could have been done right, but it seemed rushed, incoherent, and most of all annoying.  If you have someone you know who loved this film, consider not returning their calls.