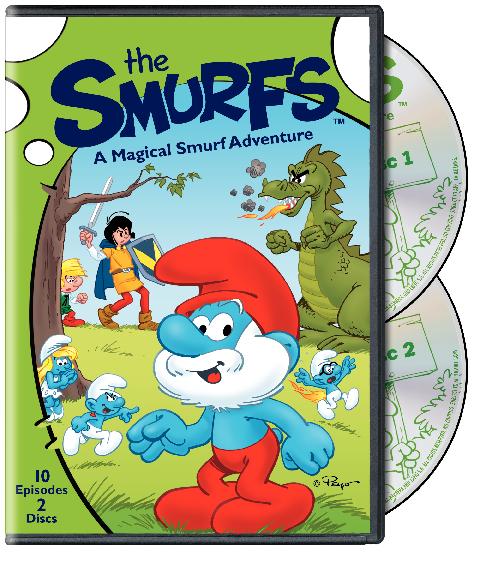 “La La La La La La! Smurf along with me!”  Yes, The Smurfs are back in a HUGE way.  With the release of the big Live Action Smurfs movie this summer, Warner Bros. has released this collection of Smurfs episodes on DVD.  The set is called ‘The Smurfs: A Magical Smurf Adventure’ and contains ten glorious Smurf episodes from the 1980’s.  It was really good to see these on DVD.  They looked really looked really pristine.

“Get your Smurf on with this 2-disc set of 10 Smurftacular Episodes! In a hidden village dwells a clan of magical creatures, living in mushroom houses and taking showers with dewdrops. They’re those international celebrities known far and wide as the Smurfs — and they’re back on DVD. This itty-bitty powder-blue crew, including Brainy, Lazy, Vanity and Smurfette, is led by the wise, gentle and 542-year-old Papa Smurf. Gargamel, the local evil wizard, is forever scheming against the tiny team but our little friends outsmurf him every time! The Smurfs may only be three apples high, but they left miles of smiles on the faces of Saturday morning cartoon fans from 1981 to 1989!  Smurf it up again with this colorful collection of superior Smurftainment!”

I just hope at some point these cartoons will be converted to HD.  It really brought back great memories watching these cartoon classics again.  Very nostaligic and of course that song.  You won’t be able to get it out of your head.  The video itself is decent for what it is.  They look better than they did before and the upgrade is welcome for what little it is.  The audio sounds great, but I’d wish for a fuller sound.  None the less, it is an excellent set to own.  Especially since the big Smurfs live action film is coming this summer.  This is mandatory watching before seeing that film.  Plus if you hae kids, they will love this show and you can show them where everything came from.

I wish there were better extras on these discs.  The only two you get are ‘Smurf Speak: Express Yourself the Smurf Way’ and ‘Smurftastic Moments: Top 10 Moments from the Smurfs Second Season.  These could have been better.  But overall, this is one wonderful and funny set.  I definitely recommend this.  Smurfs still hold up.

The WB shop is currently selling the DVD set for $18.95 which you can buy HERE. Or you can purchase it on amazon below for $15.99.

2 thoughts on “Bryan Reviews ‘The Smurfs: A Magical Smurf Adventure’!!! (A DVD REVIEW)”