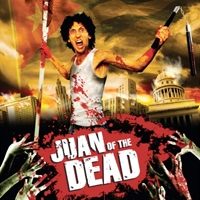 Damn this trailer looks so AWESOME.  I never get tired of zombie films.  EVER. “In the film, Havana is overrun by Zombies while’s Cuba’s Commie leaders insist it’s just a plot by US-backed dissidents to bring down the government. It is up to the hero Juan to rid the island of the undead for money. But as the zombie outbreak begins to spread, he is left with no choice but to fight for his own survival.”

“It’s a zombie film but it’s about Cubans and how we react in the face of a crisis because we’ve had a lot of them here over the last 50 years,”

“It is a social comedy, it has a bit of everything. It has horror, it has action and it pretty much laughs in the face of problems.”

This movie looks so good.  I must make it my mission to see this as soon as possible.  Enjoy the trailer.

Holy Salty Balls. I wish I was fluent in Spanish because I don’t want to waste any of my time reading sub-titles. This is probably the best thing to ever come from Cuba and I cannot wait for this to be released. Seriously, this is why I love movies and the fact that I can now lay claim to the term “US Government Paid Dissident Vampires!”