‘O Brother, Were Art Thou?’ Bluray Announced and Detailed!!! 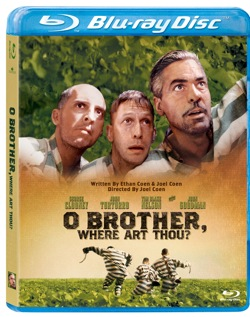 O BROTHER, WHERE ART THOU?

George Clooney (The Perfect Storm) and John Turturro (Cars 2) embark on the adventure of a lifetime in this hilarious, offbeat road picture. And now, for the first time, this quirky gem shines more brightly than ever in Blu-ray High Definition!

Fed up with crushing rocks on a prison farm in Mississippi, the dapper, silver-tongued Ulysses Everett McGill (Clooney) busts loose…except that he’s still shackled to two misfits from his chain gang: bad tempered Pete (Turturro) and sweet, dimwitted Delmar (Tim Blake Nelsen) With nothing to lose and buried loot toregain, the three embark on a riotous odyssey filled with chases, close calls, near misses and betrayal.  Experience every unpredictable moment as it plays out in the crystal-clear sound and breathtaking picture quality of Blu-ray. Populated with strange characters,including a blind prophet, sexy sirens and a one-eyed Bible salesman (John Goodman), O Brother, Where Art Thou will leave you laughing at every outrageous and surprising twist and turn!

“I Am A Man Of Constant Sorrow” Music Video

2 thoughts on “‘O Brother, Were Art Thou?’ Bluray Announced and Detailed!!!”