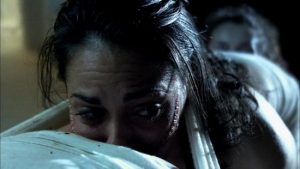 Well  we have known for quite a while now that a sequel to the instant cult classic film ‘The Human Centipede: First Sequence’ was going to happen.  Director Tom Six even told us that it was going to be a much more graphic sequel than the first film saying, “the sequel would make the franchise’s traumatizing first entry look like My Little Pony.”  And after reading some of the spoilers and information about the sequel, not only is that statement one billion percent true, but this sequel might be the ultimate in grueling torture, sexual depravity, and unrelenting terror.

The BBFC (British Board of Film Classification has just refused to certify any copies of ‘Human Centipede 2: Full Sequence’ for distribution on DVD citing, “the sexual arousal of the central character at both the idea and the spectacle of the total degradation, humiliation, mutilation, torture, and murder of his naked victims.”  Hardcore right??  It gets better.  So the first film had a three person ‘human centipede’.  This new film will have a twelve person ‘human centipede’.  And while Tom Six had declined to give specific details on the sequel, the British censors have given detailed reasons why they chose to ban the film in their country.  I can only say it some of it involves barb wire and sandpaper.

GODDAMN!!!  I can’t wait to see this.  And for the record,  I am very much against banning film and art.

Below are the spoilers and information from the British censors with what we can expect from this one of a kind film, ‘Human Centipede 2: Full Sequence’.

The Human Centipede II (Full Sequence) is a sequel to the film The Human Centipede (First Sequence), which was classified ‘18’ uncut for cinema and DVD release by the BBFC in 2010. The first film dealt with a mad doctor who sews together three kidnapped people in order to produce the ‘human centipede’ of the title. Although the concept of the film was undoubtedly tasteless and disgusting it was a relatively traditional and conventional horror film and the Board concluded that it was not in breach of our Guidelines at ‘18’. This new work, The Human Centipede II (Full Sequence), tells the story of a man who becomes sexually obsessed with a DVD recording of the first film and who imagines putting the ‘centipede’ idea into practice. Unlike the first film, the sequel presents graphic images of sexual violence, forced defecation, and mutilation, and the viewer is invited to witness events from the perspective of the protagonist. Whereas in the first film the ‘centipede’ idea is presented as a revolting medical experiment, with the focus on whether the victims will be able to escape, this sequel presents the ‘centipede’ idea as the object of the protagonist’s depraved sexual fantasy.

The principal focus of The Human Centipede II (Full Sequence) is the sexual arousal of the central character at both the idea and the spectacle of the total degradation, humiliation, mutilation, torture, and murder of his naked victims. Examples of this include a scene early in the film in which he masturbates whilst he watches a DVD of the original Human Centipede film, with sandpaper wrapped around his penis, and a sequence later in the film in which he becomes aroused at the sight of the members of the ‘centipede’ being forced to defecate into one another’s mouths, culminating in sight of the man wrapping barbed wire around his penis and raping the woman at the rear of the ‘centipede’. There is little attempt to portray any of the victims in the film as anything other than objects to be brutalised, degraded and mutilated for the amusement and arousal of the central character, as well as for the pleasure of the audience. There is a strong focus throughout on the link between sexual arousal and sexual violence and a clear association between pain, perversity and sexual pleasure. It is the Board’s conclusion that the explicit presentation of the central character’s obsessive sexually violent fantasies is in breach of its Classification Guidelines and poses a real, as opposed to a fanciful, risk that harm is likely to be caused to potential viewers.

HOLY FUCK!!!  “…risk that harm is likely to be caused to potential viewers.”  That’s like the biggest compliment for a horror film EVER.  I must say, Tom Six is not fucking around by any means, and is going all out with this one.  I can’t wait to see what he does in his future projects.  And I for one cannot wait to see this sequel.

Purchase the original film below.