Guillermo Del Toro’s ‘Don’t Be Afraid of the Dark’ Too Scary For PG-13 Rating. Gets ‘R’ Rating!!! 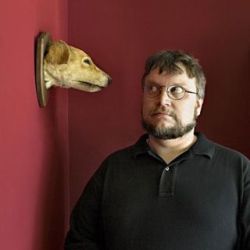 “This movie was in mind for a PG-13, but I will say with great honor the non-negotiable R-rating from the MPAA, I wear as a badge of honor,” del Toro quipped before the screening. “Whatever they saw that they thought was ‘R,’ we didn’t want to cut. So I don’t know why, but it’s an R for ‘pervasive scariness.’”  How awesome is that??

Del Toro went on to say, “It’s like getting an award for sexiness; I’ll take it.”  I just love Guillermo Del Toro.  “The film stars Katie Holmes as an interior designer restoring a spooky Gothic mansion with her architect boyfriend (Guy Pearce). His young daughter Sally (Bailee Madison) comes to live with them and discovers supernatural fairy-like creatures living in the basement — creatures that are so very hungry.”

Supposedly this film has no torture and virtually no gore, but is so tense and scary, that it pulled that ‘R’ rating.  That is great filmmaking.  Also Guillermo adapted this film from a 1973 television horror movie of the same name.  This film is going to rock.  I can’t wait to see it.  The trailer for this film is amazing.