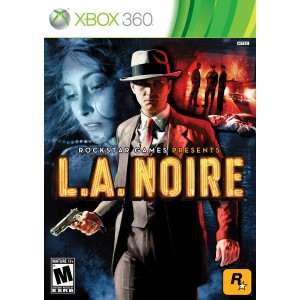 This excellent video game from Rockstar Labs just came out a few weeks ago.  The same makers of the Grand Theft Auto series and Red Dead have made L.A. Noire which takes place in the 30’s or 40’s and is fucking AMAZING.  Most video games these days are $60.00.  But for a very short time and while supplies last, come get this L.A. Noire video game through us and you will save $20.00.  The game is $39.99 for a very limited time.  Get it on XBOX 360 or PS3.

“Amid the post-war boom of Hollywood’s Golden Age, newly minted detective Cole Phelps is thrown headfirst into a city drowning in violence and corruption. Utilizing groundbreaking new technology that captures an actor’s facial performance in astonishing detail, L.A. Noire is a violent crime thriller that blends breathtaking action with true detective work to deliver an unprecedented interactive experience. Interrogate witnesses, search for clues and chase down suspects as you struggle to find the truth in a city where everyone has something to hide.”