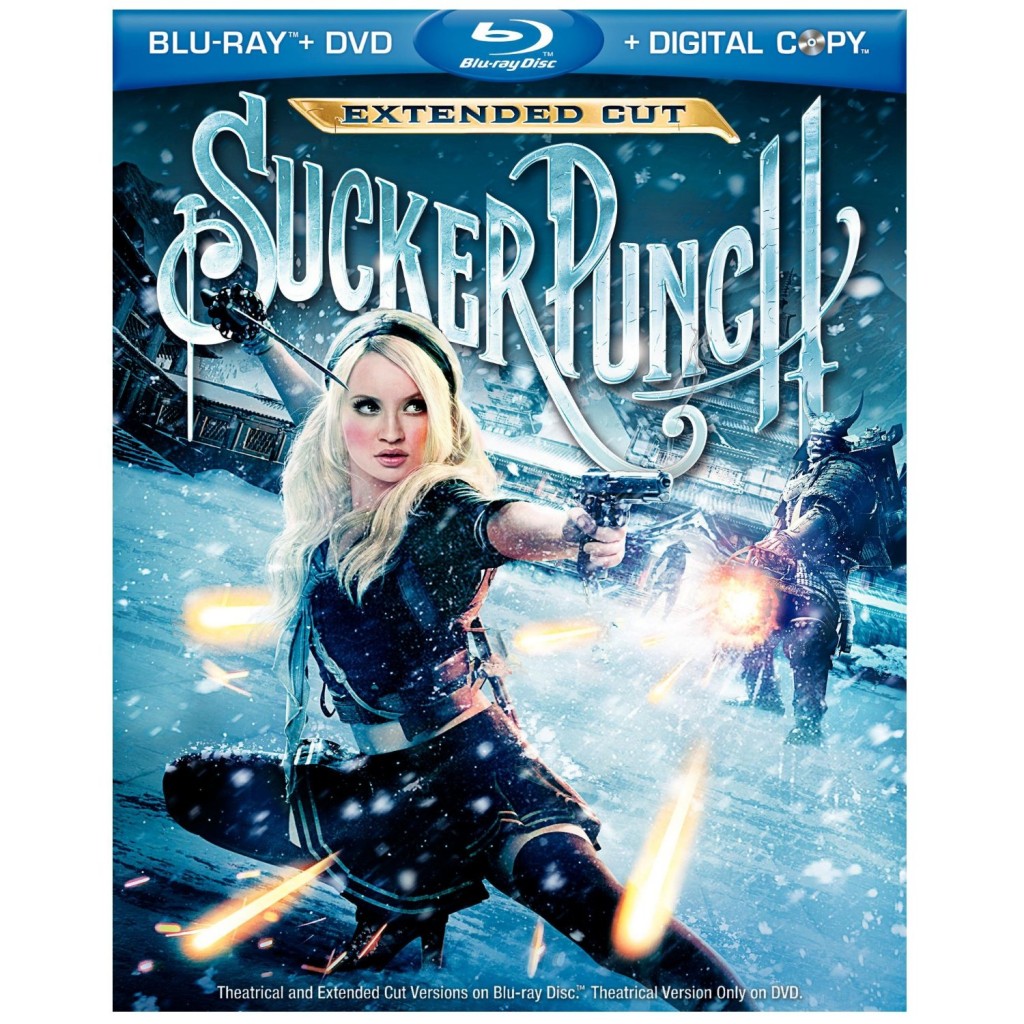 First and foremost, this blu-ray of Zack Snyder’s ‘Sucker Punch’ might be one of the best, if not the best looking and sounding release of the year.  Scratch that.  EVER.  I was just blown away by the picture and sound Warner has mixed on this film.  It is truly remarkable.  Now that being said, the film itself is a chaotic mess.  Yes it looks cool and it is fun to see the huge spectacle on screen, but none of it really makes any coherent sense of  a story.

I really am not sure what Zack Snyder was going for in this film, but I will give it my best shot.  So we start out seeing a sort of montage scene (in typical “no dialogue” slow motion Snyder vision) of two sisters whose mother has just died.  The evil stepfather seems happy about this due to his knowledge that he will inherit all of his wife’s money.  To his dismay, he is left with nothing and all the money his left to her two daughters which infuriates him.  So much so that he goes off the chain and is about to beat the hell out of the youngest sister.  The older sister who is named ‘Baby Doll’….yes ‘Baby Doll’ tries to save her little sister from the beating by their evil step father, but fails when she mis-fires a gun that kills her little sister instead of her evil stepfather.  This gets her thrown in a nut house.

Baby Doll quickly means a group of girls and befriends them.  This nut house is known for its lobotomies and it becomes clear that Baby Doll is on the schedule for one.  This is where we see ‘Mad Men’ star John Hamm who plays a doctor.  Just before Hamm nails the pick into Baby Doll’s brain, we are delivered to a somewhat “Inception” like dream state where Baby Doll and her friends are strippers and dancers held hostage in a brothel.  The nurses, janitors, and teachers of the “real world” nut house are all present in this dream world, but have taken on different roles such as a dance teacher, a pimp, and an extremely rich guy.

So Baby Doll in one of her dreams, meets a strange guy actually named Wise Man who tells her she can escape the nut house, but she must acquire four items.  A knife, a map, fire, and a key.  Sounds like a video game doesn’t it?  So in order to escape, she enlists the hep of her new friends who will also get to escape the looney bin too.  This is where they begin to acquire the four items.  They do this by Baby Doll doing a dance routine, and somehow this hypnotizes the viewer so that the other girls can steal the items.  So basically like ‘Inception’ we are going into a dream within a dream, but without the briefcase and Leo.

Now when the girls and Baby Doll go into these dream like states and hypnotize their viewers to acquire their items, we are transported to some really kick ass ultra violent war zones which include a World War 1 scenario, giant blood thirsty samurais, a mean as hell giant dragon, and killer robots.  This is where the film succeeds.  All these sequences are so much fun to watch and are on such an epic scale that it actually seems very realistic.  It really is spectacular.

So in watching this movie, you should not contemplate on what its about for too long.  You will only end up hating it.  You just have to sit back, relax, and enjoy the crazy shit you are watching.  Don’t think of it as a serious film, but rather some crazy fantasy hardcore action flick with no rhyme or reason.  ‘Sucker Punch’ is definitely fun to watch, but lacks character development, story, and meaning.

Now like I said before, this might be the best sounding and look blu-ray to ever hit the market.  It is astounding.  The video is a stunning 1080p transfer with a bright and colorful image.  This is virtually a flawless video presentation.  Shadows are lined and all atmospheres are perfectly colored.  Textures of clothes and skin are lifelike and incredibly presented.  Truly outstanding.   Now the audio is completely perfect in every way.  This amazing DTS-HD 5.1 sound mix is utterly AWESOME.  Every bit of sound from the dialogue to the action scenes, to the distant ambient noise can be heard on all speakers.  You will hear everything crystal clear.  Your body will rumble, your house will rumble, your inner geek and tech soul will cry out, “FUCK YES THIS IS AWESOME!”  Completely demo worthy all around. 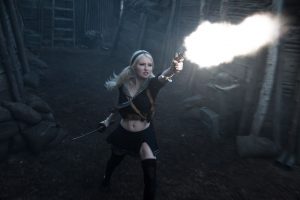 Extended Cut: Maximum Movie Mode (HD, 128 min.) — This is where all the features really are.  In this one little push of a button extra.  Basically if you have seen ‘300’ or ‘Watchmen’, and you have watched the Maximum Movie Mode with those films, then this is the same thing.  Basically, you will watch the film and throughout the entire film there is a PiP (picture in picture) box on the screen that enhances.  You are then treated to Zack Snyder, the director of the film, who shows you all the behind the scenes as the film is going on from how they did the FX and model making, to how he did the slow motion photography and everything else in between.  This is completely badass and is required viewing after watching the film on its own.  AWESOME. 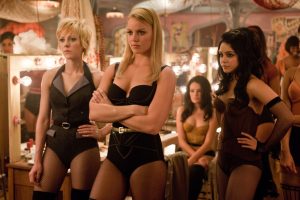 ‘Sucker Punch’ comes with the bluray, DVD, and digital copy plus the theatrical version and extended version.  The extended version is only about 15 minutes longer.  Originally the theatrical cut was PG-13, but Snyder had to cut that 15 minutes or so footage to get that rating.  The extended cut has that hot and steamy and violent footage that would have given it an R rating.  The extended cut is better I must say.  But ‘Sucker Punch’ is definitely a DEMO worthy blu-ray that I have no doubt you will be showing your friends how awesome your home theater system is.  The audio and video are pretty much perfect, and the Maximum movie mode is very informative and fun to watch.  Sadly the film itself, just isn’t up to par.  It’s all about style and no substance with this one.  But I am definitely highly recommending this film.  It’s beautiful, fun loud, and completely insane.  Enjoy it.

One thought on “Bryan Gets A ‘Sucker Punch’ To The Face!!! (A Review)”