The Weinsteins Are Remaking “Seven Samurai” Plus They Have Found Their Director To Take On The Job!!! 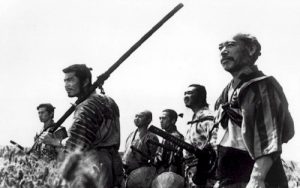 The Brothers Weinstein have tapped into remaking yet another classic.  This time it is the beloved Akira Kurosawa masterpiece “Seven Samurai” according to Variety.  Seven Samurai was a huge inspiration for several later films including “The Magnificent Seven”.  It seems that along with the Weinsteins, the Japanese Kurosawa production people will be producing the film as well.  But, it looks like this remake of “Seven Samurai” won’t feature any samurais at all and will be a modern tale of the original.

The director the Weinsteins have chosen is Scott Mann who recently made “The Tournament” which starred Robert Carlyle, Kelly Hu, and Ving Rhames.  Other than that, Mann has not done anything in feature films.  Per Variety: “In the “Seven Samurai” remake, a town in northern Thailand recruits seven paramilitary contractors from around the globe to defend it from attack.”

The writer of Young Guns, John Fusco has been hired to pen the script which he has been writing and fine tuning for over a year now.