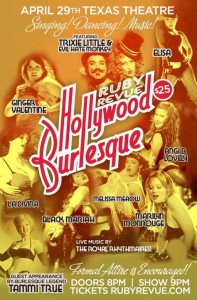 The Ruby Review celebrated their one year anniversary Friday evening, April 29th at the Texas Theater in Oak Cliff. The theme was “Hollywood Burlesque”, including a lot of glitz and glam!

Live music by The Royal Rhythmaires was a nice addition before, during, and after the show!

Mistress of Ceremonies, Miss Violet O’Hara (wearing a purple gown with purple boa) has a sassy entertaining wit. Her energetic personality shines as she pumps up the audience and introduces the acts. As she starts talking, most new spectators are surprised and not expecting her to tell us, “That last act was fucking awesome!” I hear audience members turn to each other and say, “That is exactly what it was… fucking awesome.” The thing is, Miss Violet O’Hara requires audience participation, she will not let someone in the audience just sit there…

Missy Lisa (Elisa) is the creator of the Ruby Review and the Dallas Burlesque Festival. She was the producer of the one year anniversary Hollywood Burlesque show. This show featured dancers from Elisa’s troupe Rated ‘R’ and Ginger Valentine’s Lone Star Sweethearts. Both are instructors for classic and neo burlesque classes at The Ruby Room Studio which is Dallas’ first adult dance studio focused on burlesque and classic striptease. Ruby Review cast member, Black Mariah used her Betty Box full of toys as she showed off her tricks! She surprised the audience with her flaming corset as well!

Before the show Dallas’ legendary Tammi True was introduced as she walked around with cameras following her. During intermission there was a auction of various items such as bras worn by the girls in order to send Tammi True to Las Vegas for the Burlesque Hall of Fame. One of the top items was a $3 toy split paper yo-yo (Chinese yo-yo), which Miss Violet O’Hara kept referring as a “penis toy” that was purchased for $100. Tammi performed an encore dance at the end of the evening, showing her classic moves.

Another special guest came from Austin’s Jigglewatts Burlesque. Multi-talented Ms. Jolie Ampere Goodnight sang a jazz song as she teased the audience and pealed her lingerie off. Her performance was true Hollywood Burlesque. 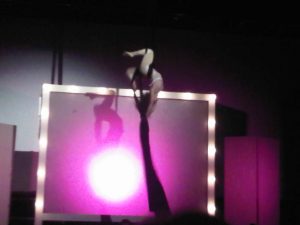 Another Ruby Review cast member, Angie B. Lovely was astounding as she performed her aerial act. She climbs and poses on what looks like curtains hanging from the ceiling and soars through the air with ease as she strips off what she is wearing. She was impeccably graceful as she twirled around in the air. Amazing.

Melissa Meoaw,  Honey Cocoa, Ginger Valentine and Elisa all wow’d the audience with their artful dancing throughout the evening as well.

But, another one of the highlights were performances from circus burlesque performers, Evil Hate Monkey (Mr. Exotic World, 2010) and Trixie Little (NYC), Baltimore). Monkey came out on stage and pulled a banana out of the front of his… thong. He was a funny little thing… he pealed the banana took a bite and talked with his mouth full and threw pieces of the banana out into the audience. He had monkey ears and a handlebar mustache, very hard to not laugh, based on looks alone. Trixie’s solo dance was playful with a big ball that was her prop. Evil Hate Monkey and his partner Trixie Little had the final dance, based on Dirty Dancing. It was poetic, amazing and humorous.

During intermission there was a auction of various items such as bras worn by the girls in order to send Tammi True to Las Vegas for the Burlesque Hall of Fame. One of the highest items was a $3 toy split paper yo-yo (Chinese yo-yo), which Miss Violet O’Hara kept referring as a “penis toy” that was purchased for $100. Tammi did an encore dance at the end of the evening, showing her classic moves.

It was a classic evening of true Hollywood glam and burlesque. Congratulations on one year Ruby Review!