The “Neiman Marcus” of home video releases, Criterion, has picked up the distribution home entertaiment rights to their first Korean film to add to their extensive yet very selective library of some of the best films ever made.  That film is ‘Secret Sunshine’. 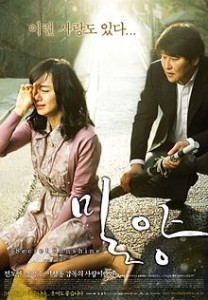 This Korean film was at the 2007 Cannes Film Festival and Won Best Actress Award for Jeon Do-Yeon.  It also won Best Picture and Best Actress at the Asia Pacific Screen Awards.  The film currently has a 92% rating over at Rotten Tomato. The film is basically about a single mother who loses her husband tragically and moves to his hometown to start a new life.  While there she begins her journey to discover new life, meaning, purpose, humanity, and God.

Looking forward to this Criterion release, I am sure it will be GOLD just like the rest of their releases.