Bryan Journeys Into Mystery With “Thor”!!! (A Review) 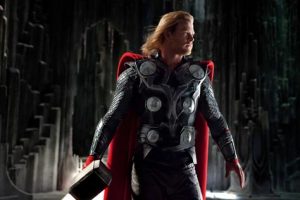 The Almighty Thor is finally here.  Marvel’s next feature film in their line of super-hero films revving up for the huge epic “Avengers” film may surprise you.  Thor is great.  It’s very different from the past Marvel films, but different is very good.  Especially for a hero like Thor.  What makes Thor different from the other Marvel Super-Heroes in films is that Thor is not from Earth nor is he really a human.  He is a GOD.  And when I think of Thor my brain usually goes to the Greek Mythology place and to that Shakespearean universe.  So it was only too perfect that Shakespearean vet, Kenneth Branagh would be the director for this epic film of Thor.

So since the first trailer for Thor and the many that followed, I grew more and more dreary of actually seeing this movie.  The trailers were cut in such a way, that it made the film seem like a teeny bop film with horrible cheesy dialogue that only 13 year old girls would like.  And add to that the no show of nothing on Asgard or really any battles or use of Thor’s BADASS weapon MJOLNIR.  So all I really knew or expected going in to Thor was really just HOPE.  Well I shall say to you….Thor does NOT disappoint.  Don’t lose that hope for this movie.

Now many of you Thor enthusiasts and geeks out there are probably wanting to know if this is the Ultimate Epic Thor film to end all Thor films.  It’s not.  However it is the perfect starting point for many a more Thor films to take place before and after “The Avengers”.  Marvel and Kenneth Branagh really did Thor right.  At least the beginning of what could be one hell of a franchise.

So Thor takes place mainly in two locales being Earth and Asgard with two different story plots going on during the film.  So you will switch back and forth between the planets several times during the movie.  The film starts out with Thor falling to Earth and Natalie Portman, Kat Dennings, and Stellan Skarsgard discovering what has just fallen from the sky.  Then you cut to the backstory of the film on Asgard of how Thor was cast out of Asgard and onto Earth.  Cut back to Earth right where you left off with Thor not knowing where he is and Natalie Portman finding him. 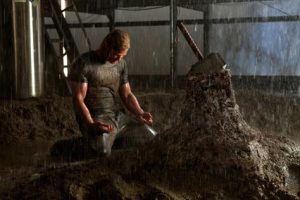 Now this film is not just a beginning film of Thor.  It is also a beginning story of Loki who in the comics is Thor’s adopted brother.  Loki is Thor’s younger brother and is constantly jealous of Thor and is always causing harm and mischief to everyone around him because he has the gift of a great magic.

Now above I said that this Marvel film is different than the previous Marvel super-hero films and I will tell you why.  Thor has a very Shakespearean feel to the whole story.  And with that, the characters are so involved and intense and dramatic.  I have not seen this in any other Marvel film before.  Sure I get the usual tiny dramatic bit, but not like this film.  This is some next level acting.  It is most welcome.  The romance in Thor is brilliant and very believable.  This is mostly to Chris Hemsworth and Natalie Portman owning their roles.  You just believe every part of it.    When Natalie smiles at Thor, it just grabs your heart and you just believe it.  I have not seen this done this well in any previous Marvel super-hero film.  It’s truly remarkable.

Now let us get to to Chris Hemsworth who played the God Thor.  We all remember him for his very short lived role in J.J. Abrams’ Star Trek film as Tiberius Kirk.  He was really good in Star Trek, even for thaT few minutes he was on screen, but you believed he was a Captain and capable of being a BADASS.  Well let me just say that Hemsworth is the prefect Thor.  He has the guts, the charm, and the magnetism of a real GOD  in this film.   He just owns it.  And he owns you watching the film.  When he is in his Asgardian warrior wardrobe or just in casual Earth attire, you can see that it is actually Thor standing right there in front of you.  Hemsworth just owns all aspects of this God hero. 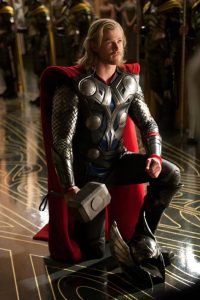 Now for Loki who is played by Tom Hiddleston.  You could not have cast a better actor for this role.  Loki is simply a master deceiver and liar.  He tells people what they individually want to hear to get his way and he stops at nothing nor does he care for anything except for himself and his agenda.  In order to pull this off, one must not be over the top, but be very simple yet chaotic and Tom brings tis to perfect form.  It is all very frightening in a way.  The way he talks with his father, mother and his brother Thor.  You can tell he is working things out in his favor very subtly, yet with an intense glaze.  Perfection.  The interactions with Thor and Loki are so epic and dramatic, it is some of the best interactions on screen I have seen in a long time.  Again very Shakespearean.

Odin is played by Anthony Hopkins who of course is always brilliant and is born to play a king.  But not only a king, but a father.  Every time Hopkins is on screen you just root for him.  But we all know Hopkins is going to do an amazing job in everything so expect nothing less than awesome from him.

So yes, there is plenty of action, fighting, and Thor with his mighty Hammer.  They really used Thor’s hammer, Mjolnir to its full capacity.  The battle with the frost giants is fucking EPIC.  All the cool shit Thor can do with the Hammer, like creating a mimic tidal wave of rock and earth or swinging the hammer at high speed to knock out several enemies at close range or throwing Mjolnir like a boomerang or my favorite flying with the hammer straight through the bodies of the enemies.  Yes Thor does fly with Mjolnir his hammer.  But he flies with grit, purpose, speed, and fucking balls.  It is definitely cool. 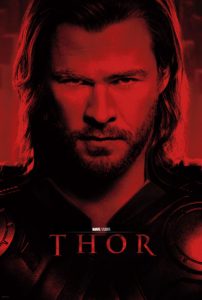 Like I said, this is a starting off point for Thor and a bridge to some possible very fucking epic and cool Thor films in the future post Avengers.  It is done perefectly.  Kenneth Branagh made one hell of an entertaining Thor film for Marvel and I hope he returns for another Thor sequel.  And the romance between Natalie Portman and Thor just seems three million precent real which makes the film that much better.  And Chris Hemsworth is the perfect Thor.  Past,present of future.

I was very very pleased to see a very short cameo of Hawkeye.  It was such a tease.  I know Marvel will be making a Hawkeye film soon, and Hawkeye will be played by Jeremy Renner from “Hurt Locker”.  You just so badly want to see Hawkeye in action.  Oh what a tease that was.  I want more.  More I say.  From the small part of Hawkeye, I could tell Jeremy Renner is going to be a BADASS.  Oh can’t wait.

And just like the previous Marvel films, make sure you stay till after the credits roll for your sneak of “The Avengers”  coming together.  Sam Jackson does make an appearance here as Nick Fury, but that is all I will tell you for now.  You will have to see it for yourself.  It’s HUGE!

In all, this Thor film is a lot of fun and just made me very happy.  It’s a one of a kind super hero film with romance, thrills, action, and Hammer swinging.  GO SEE THIS FILM.  Can’t wait for Captain America and Avengers now.  I would like more Thor films please.

4 thoughts on “Bryan Journeys Into Mystery With “Thor”!!! (A Review)”