Bryan Has A Blast With ‘Frankenstein Jr. And The Impossibles’ Complete Series!!! (A Review) 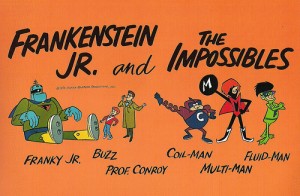 I am so delighted to be seeing this on DVD for the first time.  I love watching old cartoons from the 60’s.  And ‘Frankenstein Jr. and the Impossibles’ was so much fun.  There were only two seasons with less than 20 episodes in all, but the rock music/action hero cartoon packed each episode with tons of great fun.  It reminds me of ‘Fraggle Rock’ meets ‘Partridge Family’ in the vein of Hanna-Barbera.  This cartoon series also made for some of the most bizarre animated sequences I might have ever seen.  I witnessed a giraffe running upright on two legs with a gun and jumps into an art easel to disappear.  No, I was not on that acid you gave me last year.  Just loads of Dr. Pepper.

So part of the Frankenstein JR. and the Impossibles team is Professor and Buzz Conroy who are a father son duo of scientists who use their intellect to defeat evil.  The villains are fucking great.  An origami villain, a gun toting giraffe, and a crazy artist are just some of the hilarious villains that are conjured up in this brilliant 60’s television series.   Well, the father son team create this giant robot they call Frankenstein Jr. or Frankie for short.  Frankie flies around kicking ass and taking names while he rids the city of evil and crime. 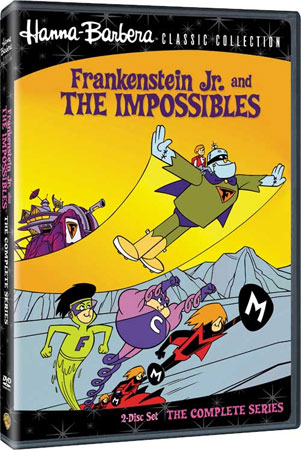 The other part of the team are the Impossibles which are a trio of guys who disguise themselves as a rock band, but are actually super heroes.  The Impossibles were originally called The Incredibles in the pre-production of this series.  Cool huh?  There is Multi-Man, Coil-Man, and Fluid- Man.  Multi-Man can multiply himself many times.  Coil-Man turns into some sort of bed spring or slinky.  Fluid-Man as you can guess can transform into liquid.  Sounds awesome right?  Well yes.  Yes it is. 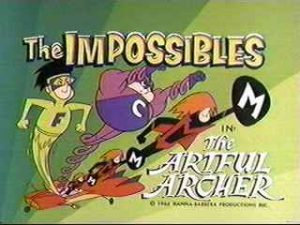 This show is a whole lot of fun.  The music from the 60’s is actually pretty great to listen to and the heroes and villains are so out there, that it makes it so amazing to watch.  It’s got that nostalgic feel that makes you all warm inside.   The animation is so groovy and like you are on an acid trip from the 60’s and the voices of all the characters, you will recognize from shows like ‘Scooby Doo’, ‘Dragnet’, ‘Addams Family’, and ‘The Andy Griffith Show’.

“Frankenstein Jr. and the Impossibles is one half-hour packed with the adventures of two of the most unusual animation creations of the legendary Hanna-Barbera studio. Buzz Conroy is a heroic boy-genius who builds the powerful robot Frankenstein Jr. When the Ghastly Genie, the Junk Man and other evildoers get up to their old tricks, “Frankie” and his young creator crank into action. The crime fighting coalition continues with the Impossibles, a group of superheroes disguised as a beatnik rock group. At the direction of “Big D,” Multi Man, Coil Man and Fluid Man make hot-rockin’ musical justice thwarting thieves and corralling crooks with their transformative powers. All-family classic cartoon fun isn’t just possible – it’s guaranteed with this 2-Disc, 18-Episode Collection.”

I definitely recommend this blast from the past to add to your collection.  This is an exclusive DVD only to the WB Shop and made to order so there is collectibility in this.  Plus it is just a whole lot of fun.