The Third Batman Film Moves From Chicago to Pittsburgh!!!!

The past two Batman films have been filmed in the Chicago area and they have looked phenomenal there.  It actually looked like what I picture Gotham to be.  It was beautiful and haunting all at the same time.  Now, Nolan has announced that he will film the third Batman film “The Dark Knight Rises” in Pittsburgh.

So apparently  Pittsburgh impressed Nolan so much that he has chosen to film there.  I have no been to Pittsburgh before but it looks like it is going to make an excellent backdrop for Gotham. 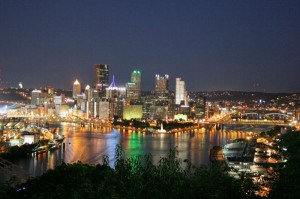 Mayor Luke Ravenstahl proclaimed, “We are thrilled to be welcoming the Batman film to Pittsburgh, and eager for the economic impact that our city will experience.  This is another example of the growing film industry in our community, and we will be rolling out the red carpet for them.”

And Nolan himself said: “Pittsburgh is a beautiful city. We have been able to find everything we were looking for here, and I am excited to spend the summer in Pittsburgh with our final installment of Batman.”