The Rebirth Brass Band from New Orleans, LA made an unforgettable appearance at the Kessler Theater Friday, April 15, 2011. Let me tell you,  it was a party -New Orleans style! Even some members of the audience actually said they felt like they were in 504 for just a few minutes.

They just dropped their newest album, Rebirth of New Orleanson Tuesday April 12, 2011. The album features 11 songs and is available in stores or download mp3s for $9.99 HERE!

The Rebirth Brass Band originated almost 30 years ago (28 to be exact)﻿﻿. There has been some shuffling of the members, but as of now, the band consists of 8 talented gentleman: 3 trumpet, 2 drum, and 1 tuba, sax, and trombone player. Each one of them brings something special to the entire sound. 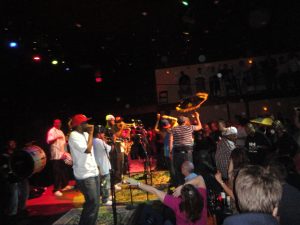 I’ve seen Rebirth before (about five times) all in New Orleans at the outside Jazz Festival. This time was a little different, it was in Dallas and inside. It was 100% a good time, it DID NOT DISAPPOINT! Every person in the venue was having a fantastic time. There wasn’t one person still, even the folks sitting down were movin’! There were times when audience members got up on stage and danced around with each other and performed the New Orleans traditional second line dances with the band and they even included the umbrella!

Their funk jazz combo was ever-present throughout the evening. The band would play their music (without words) and then ask the audience for their involvement by singing to them with whoa’s or yeah’s. There was one song where the crowd was singing along with the band, “Rebirth’s on Fire”, members of the band would start clapping and then the audience would mimic the clapping while continuing to dance with arms in the air.

There were people on the second level on a balcony engaged and dancing as well. The venue gave a feeling and mood of New Orleans.  The feeling was upbeat the entire time with cheering from the audience! The still parade was a great experience for everyone involved.

After the show, I found out that Rebirth does love to play in Dallas and they feel appreciated by the fans here. I spoke with Derrick Tabb (drummer) and he informed me of his school that he started in 2007 for children who are not necessarily musicians but want to play. He said that this involvement with music would keep the kids off the street and that school was what saved him and he wanted to do the same for others. More information about his school in New Orleans is on the band’s website HERE!