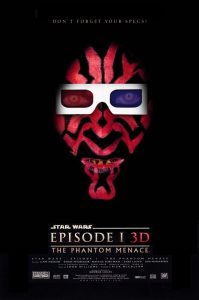 The people behind the curtain have some new details regarding the 3D conversion process for the Star Wars films.  As we previously reported HERE, Lucas is converting all the Star Wars films into the 3D and re-releasing them theatrically starting next February beginning with Phantom Menace.

The extensive conversion process is being completed under the close supervision of John Knoll, Visual Effects Supervisor for ILM.

“Getting really good results from stereo conversion requires a lot of attention to detail and it is imperative that you take the time to get it right – and that’s just what we’re doing,” said Knoll. “We’re taking a different approach than you might expect. George’s vision has been to add dimension to the film in subtle ways. This isn’t a novelty conversion, with things jumping out at the audience; our goal has been to enhance the classic Star Wars theatrical experience, utilizing the latest cinematic tools and techniques.”

It seems that the people who are working on this conversion are paying more attention than Lucas did himself with the films.  Which is no surprise.  With all the reboots and remakes that are happening…..how about rebooting and remaking Episodes 1-3.