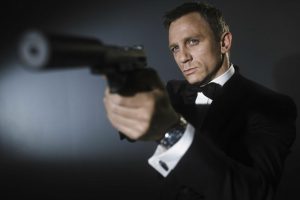 So we all know the dilemma and turmoil plaguing James Bond with MGM.  Well “GOOD NEWS EVERYONE” (in my best professor Farnsworth voice)!   MGM and Sony have settled down and we will have a new BOND film.  This could have taken years and years, but luckily they had the right people high up and they wanted to make some good films….or make money.

In the press release below it seems like we will get a Bond film in the next two years with another one on the way after that.  Also I still think director Sam Mendes (American Beauty & Road to Perdition) will be on board to direct the next Bond film.

Culver City, April 13, 2011 – Sony Pictures Entertainment will remain in the James Bond business after reaching an agreement with MGM to co-finance and theatrically market and distribute Bond 23 worldwide, it was announced today by MGM Co-Chairmen and Chief Executive Officers Gary Barber and Roger Birnbaum and Sony Pictures Chairman and CEO Michael Lynton and Co-Chairman Amy Pascal.  Sony will release the next film in this iconic franchise on November 9, 2012 throughout the world except for select International territories, where MGM will directly oversee distribution.

Additionally, MGM and Sony Pictures have agreed to explore co-financing opportunities on future motion pictures produced by each of the respective studios for the next five years.

The two studios have collaborated directly and indirectly in recent years on numerous films, including Casino Royale, Quantum of Solace, 21, Yours, Mine and Ours, The Pink Panther, and the forthcoming Kevin James comedy Zookeeper.

The announcement of the agreement to distribute Bond 23 adds another high-profile title to Sony’s 2012 slate, which also includes Men in Black 3 and The Amazing Spider-Man, as well as I Hate You, Dad, starring Adam Sandler, Here Comes the Boom, starring Kevin James, 21 Jump Street, Resident Evil 5 and Total Recall.

“Sony Pictures is the ideal studio partner for us as MGM re-enters the filmmaking business. We have longstanding relationships with Michael and Amy and look forward to what promises to be a prosperous future together,” said Barber and Birnbaum.

“In addition to working together on Bond, this deal expands our relationship with MGM as we explore co-financing opportunities on other high-profile projects,” Lynton said. “Gary and Roger are incredibly thoughtful and experienced leaders who are outstanding creative executives and respected moviemakers. While we are excited to be back in the Bond business, we also look forward to future collaborations and I am confident that this agreement will be long-term, lucrative, and beneficial to both studios.”

“After successfully working on the re-launch of the James Bond franchise with Casino Royale and Quantum of Solace, we could not be more proud or privileged to continue our association with Barbara Broccoli, Michael G. Wilson, Daniel Craig, and the talented teams at EON and MGM,” said Pascal.