So…Record Store Day 2011 has come and gone, which means I’m certain many of you audiophiles have been over-indulging in your recent purchases, perhaps even still scouring eBay to find those limited edition records and singles you missed out on during release day. I’m right there with you, folks. In fact, a week or so later and I’m still enjoying my new music, particularly the stuff I had to additionally buy on eBay.

It was a little disappointing to have to turn to the interwebs two years in a row to get my hands on the limited edition Rolling Stones RSD release, but as is often the case, the time and money is worth it. If you are lucky, sometimes you can find an eBay listing for any of the RSD releases at a reasonable price. I was able to acquire this year’s Rolling Stones single without having to make a deal with a local loan shark, or sell a kidney on the black market.

To the average Joe, it probably seems silly to go through all that trouble just for a song or two I hear countless times on the radio for free. I actually have both a CD and vinyl copy of the “Sticky Fingers” album that contain the tracks “Bitch” and “Brown Sugar”. So, what is the deal for wanting to buy the songs yet again? The answer is simple. I’m a music fan, and a sucker for those awesome ‘unreleased’ tracks we music nerds get all excited about. What makes this year’s Rolling Stones RSD release special is the unreleased live track of “Let It Rock”, a rockin’ live Chuck Berry cover from their Leeds University, March 13th 1971 gig. Though this live cut may not be on par with say, anything The Who recorded for their Leeds stint, it does offer a small glimpse into that performance, and the possibility of a future full-length live Leeds release by The Stones. In my opinion, the world could use more of their early 1970s live recordings.

Additionally, this year’s Rolling Stones RSD release comes in a limited edition numbered picture sleeve, in case all you collectors need a money-making gimmick to turn a profit. Of course, collectibility is nice especially when it comes to RSD releases. However, I like to actually play the hell out of my records once I get them. Getting to hear new music from bands or musicians I absolutely love is worth more than the price of the record itself.

I’m still keeping my eyes open on eBay for other RSD 2011 releases that escaped my grasp this year, and finding releases I didn’t 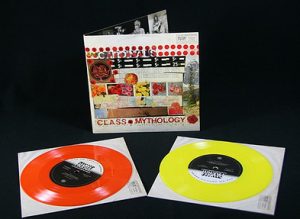 know existed from years past. (I guess that is the magic of eBay…just never know what you might find.) The other must-have release for me this year was “Class Mythology” by Ryan Adams & The Cardinals. Ever since my friend Amy Morgan introduced me to his music back in college, I’ve been a hardcore fan, eager to get my hands on every release possible. Naturally, I’m the worst kind of collector…I’m a complete-ist and money is (sometimes) no object.

“Class Mythology” is a double disc EP containing four unreleased outtakes from the “Cardinology” sessions, songs not used on the original album. Record one (yellow) features of “Go Ahead And Rain” on side one, and “Invisible Red” on side two. Record two (orange) features “Your Name Is On Fire” on side one, and “Future Sparrow” on side two. I love how the vinyl colors remind me of the nursery rhyme records I had as a kid, sturdy, bright and the hardest plastic I’ve ever known.

Though these four tracks are not the hard rocker numbers Ryan Adams fans have come to know and expect, these mellow beauties still wreak of Adams’ attractive melancholia and are steeped in his gift of well-crafted song. Heck, even your parents would fall in love with this dude.

If that weren’t enough, “Class Mythology” was only limited to 2,500 copies on Adams’ own PAX-AM label, and comes in a sweet gatefold sleeve with lyrics sheet and sticker. If you are unfortunate enough to have to buy this release in the aftermarket (like me), good luck spending less than a cool $50 for a copy. Those crazy eBay sellers know how highly sought-after limited edition Ryan Adams releases are, and charge accordingly. Nevertheless, good music is worth whatever you are willing to pay, and I’m happy to be in a position to help support the craft of the musicians I admire. They keep me going, as well.

Frankly, there are still several RSD releases I’d like to track down, but I’m hoping that after a few more weeks have passed, and the demand dies down a bit more, I’ll be able to fill in the gaps of my RSD want list, and start saving for the truckload of exclusives that are already being planned for next year. However, in the meantime it might be best to start working on some additional shelving for this growing record collection…