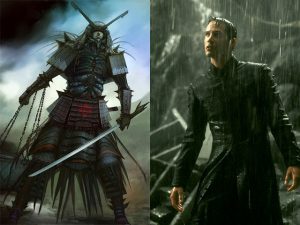 Keanu Reeves recently sat down with MTV to discuss amongst several things his Bill and Ted 3 film and a new project called “47 Ronin” which is a tale of half japanese outcast who falls in love with  a princess.  It is based on the Japanese historical tale.

Now if you are thinking that it’s a very strange decision to cast Keanu in this film, you must take into the account that this film is going to be strictly Japanese and to add a huge actor to this cast will make this film more marketable and bankable.  Plus Reeves is a very good actor and has quite a bit of martial arts training from the Matrix films to help him out on this one.

Carl Rinsch will be directing this film and this will be his first feature film to direct.  If you can find some of his commercial and short film work, I think you would say that Carl is going to be a badass in cinema.  So far “47 Ronin” is now officially on my radar.