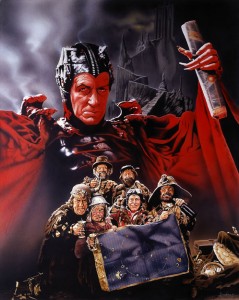 A couple of film execs are in talks with  a Hollywood producer to get the beloved Terry Gilliam film, Time Bandits a reboot.  And not just a reboot, a full fledged franchise.  Now I love the original Terry Gilliam Time Bandits.  It is a kids movie to its core.  But it plays to everyone.  I just hope that the filmmakers can do that once again.

According to Variety, nobody has been hired yet, but the film execs and a producer are in talks currently to get the ball rolling.  Now the original Time Bandits film is pretty much perfect as a stand alone film,  But I can see why the studio would want to make this in to a multiple movie franchise.  It has gold and success written all over the story part, whereas you have a young Kevin with his little friends exploring the worlds and escaping and fighting EVIL.

When they finally get to casting, they better do right by the original and for FUCKS SAKE, get Terry Gilliam involved somehow.  Offer him MILLIONS.  But sadly I am pretty sure Terry will give the big middle finger.  But take your time with this project guys.

We will be keeping a close eye on this one.