Disney and Star Wars Unite To Give Us “Star Tours” The New Version!!!! 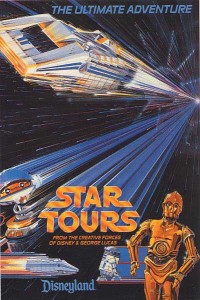 A while ago, Disney shut down the “Star Tours” ride to do some revamping and remodeling.  If you are not familiar with “Star Tours” it is a ride that takes you through the entire Star Wars universe at Disney theme parks.  We have the official press release that will tell you some information about what to expect from the all new and improved ride.  “Warp Speed Ahead!” Fuck! Wrong movie!

From the press release, we can expect the new ride to be called “Star Tours: The Adventure Continues” and that it will feature 3D effects (maybe for his upcoming re-releasing of the Star Wars films in 3D), new characters, locations as well as classic locations, and C-3PO will be piloting the ship. 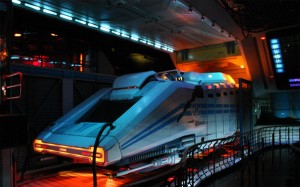 LAKE BUENA VISTA, Fla. – The power of the Force and the magic of Disney have combined to create “Star Tours – The Adventures Continue,” a new 3-D attraction set to open at Disney’s Hollywood Studios theme park on May 20, 2011. The attraction also will open at Disneyland Park in Anaheim, Calif., on June 3, 2011.

Based on the Star Wars films, Star Tours will take Walt Disney World Resort guests to multiple Star Wars destinations where they will interact with characters from throughout the Saga. And it will all be in 3-D.

With eye-popping 3-D digital filming, a dramatic musical score and motion simulator-based technology, guests will be immersed in the Star Wars galaxy like never before on a theme park attraction. Walt Disney Imagineering worked with Lucasfilm, Ltd. and Industrial Light & Magic – the groundbreaking visual effects division of Lucasfilm – to bring the out-of-this-world attraction to life.

Star Tours, which had thrilled Disney Parks guests since the 1980s, was “powered down” at Disneyland and Disney’s Hollywood Studios in 2010 so Imagineers could begin work on the new attraction.

And in a new twist, guests may be able to enjoy the attraction multiple times without ever experiencing the same adventure. More than 50 story combinations are possible for guests to experience aboard Star Tours.

Just as the Star Wars films immerse movie-goers in storylines that keep them on the edge of their seats, Star Tours will feature multiple stories and scenarios that will hurtle park guests throughout the Star Wars galaxy. And all of the storyline’s twists and turns will be random, affording guests the chance to ride the attraction multiple times.

Whether it’s a battle with Darth Vader and his legion of stormtroopers or a plea from Princess Leia to help her save the Rebellion, guests will find themselves in the middle of the action – literally – in the 3-D, multi-sensory attraction.

Entering the attraction queue area, Star Tours guests walk into a bustling spaceport. The famed Star Wars droid duo, C-3PO and R2-D2, greet them as the Starspeeder 1000 is prepped for service. Anthony Daniels, the voice of C-3PO and the only actor to appear in every theatrical chapter of the Star Wars Saga, reprises his role as the golden protocol droid. Daniels worked with Walt Disney Imagineering to record new dialogue for the attraction. Guests also are introduced to AC-38, a hotshot droid pilot known simply as “Ace,” and Aly San San (voiced by actress Allison Janney), the “spokesbot” for the spaceport.

After winding through the spaceport, guests board the Starspeeder 1000 spacecraft and prepare for Star Tours Flight #1401. Through a series of mishaps, however, C-3PO finds himself in the pilot’s seat instead of Ace, and it’s up to him and R2-D2 to navigate their passengers through the galaxy. However, the tyrannical Empire is out to stop the Starspeeder at all costs. C-3PO and R2-D2 take the controls and try to outwit and outrun the Imperial forces and a galactic bounty hunter hired to pursue the spaceship and its passengers.

Utilizing the 50+ random story combinations, the Starspeeder then embarks on a wild trip through the galaxy, visiting several planets made famous in the Star Wars films. Among the locations that might provide haven from the Empire’s pursuit are the icy planet of Hoth, the lush jungles of Kashyyyk and the underwater Gungan world of Naboo. And along the way guests may encounter Star Wars characters that offer to help (or hinder) their journey, including Yoda, Admiral Ackbar, Darth Vader and Boba Fett. “Skytroopers,” a legion of stormtroopers created just for the Star Tours attraction story, might even join in the chase.

In fact, with multiple ways to experience each flight, guests will never know where the Force will take them.