Bryan Gets Funky With Rebirth Brass Band At The Kessler!!!

I must say that The Kessler Theater in Oak Cliff is one of my favorite venues.  The place has everything going for it.  They have a great bar, great food, and some excellent acoustics.  Seeing the awe inspiring New Orleans Rebirth Brass Band at the Kessler was a true musical experience.

Once I entered the venue, there was a hearty bay full of liquor and an exquisite line of bartenders who were quick and very friendly.  Very laid back atmosphere.  Everyone at the bar was enjoying themselves.  I wandered into the main theater area and just brought back nostalgic memories from my childhood.  Old school.  It was amazing.

The opening band was Dennis Gonzalez and Bandos de Brujos (Yells At Eels). According to the Dennis Gonzalez and Bandos de Brujos Myspace Bio:  The latest movements to hit Dennis Gonzalez Yells At Eels is our involvement as Ariel Pink’s backup band (which he calls “Added Pizzazz”) in his newest projects for 4AD Records and Free Dope and Fucking in the Streets Records, which have both gone viral! The leader, Dennis Gonzalez is a legend of the New Jazz genre who leads one of the few free-, ethnic-, and improvisational-jazz groups in the North Texas region, the trio Yells At Eels; amazing since he hails from the same area as the likes of Ornette Coleman, Charles Moffett, Dewey Redman, Ronald Shannon Jackson, and the late Prince Lasha. The trio Yells At Eels started playing in 1999 and are still going strong a decade later. Gonzalez has released 35 CD’s as a leader with legends such as Famoudou Don Moye, Charles Brackeen, Reggie Workman, Oliver Lake, Alvin Fielder, Malachi Favors, Ahmed Abdullah. Yells At Eels itself has released four CD’s: “Home”, a double disk titled “Pictogram/Home Away From Home”, and the most recent release, called “Geografia”, produced by Aaron and Stefan Gonzalez, Gonzalez’s sons, who play bass and drums, respectively, in the trio. There are also 2 CD’s on France’s Ayler Records: “The Great Bydgoszcz Concert” with Portuguese saxophonist Rodrigo Amado; and “Cape of Storms” (just released in June 2010!) with South African legendary drummer Louis Moholo-Moholo.  There were two other member there that night. Aa trombone player who just rocked the house and a Saxophone player who kicked ass. 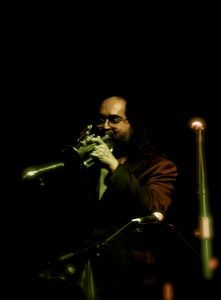 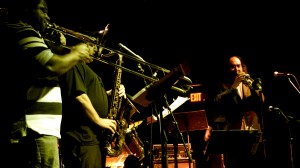 All four members rocked it with soft jazzy tunes that flowed through your soul.  Speaking of soul, it had a lot of that.It got your feet tapping.  The drummer had quite a bit of great solos and the guitar was incendiary.  They are for more of the mellow crowd, but they were a great opener for Rebirth.

Then it was time for the main event. 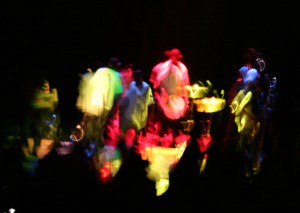 Rebirth came out one at a time to find their massive audience standing room only and jumping at the bit to start dancing and hearing their New Orleans Brass Badass Beats.  As soon as the first note was played, the packed house at The Kessler jumped up and down and moved from sided to side and threw their hands up in the air and reached for the sky.  This was a constant for the entire two hour show.

Rebirth played mostly their new album called “Rebirth of New Orleans” which takes Rebirth into their next phase of music.  While sticking to their style and distinct loud notes, I couldn’t help but feel like every single song was more upbeat, and had a wonderful charm in every single bar of music.  It was truly sublime.  The audience seemed to LOVE it as well. 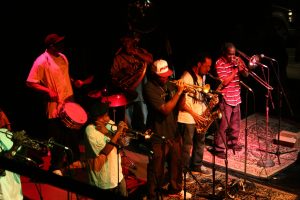 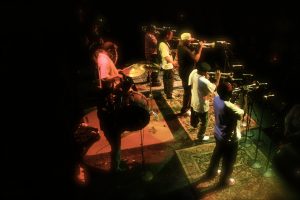 They played a few of their old tracks and I desperately wanted them to play another 45 minutes to hear more of their old tunes.  And of course it is NO Rebirth show without their AMAZING and I think the BEST in the world rendition of their “When The Saints Come Marching In”.  They ended their performance with that tune.  It was the encore.  What a great evening.

I have seen Rebirth a couple of times now and they are already a staple in my car and home, and will be a must see whenever they come to Dallas.   I urge you to listen to their music, buy their albums (hopefully they will be putting their music on vinyl soon) and make your way to The Kessler for their upcoming shows and films.  It is one hell of an AWESOME way to spend your evening.