Arnold Schwarzenegger’s Next Project Will Be “The Governator”!!! It will get the Comic Book, Cartoon, and Big Screen Treatment!!! 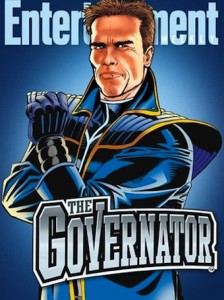 Since Arnold is done with his politcal career in California, it is only fitting he would get back into the entertainment business.  For a couple of weeks now, rumors and requests have been making their rounds on the internet as to which role will he choose first.  Well as of last week, Arnold has chosen.  His new project will be “The Governator”.

Arnold said he would transform his nickname and persona into “The Governator” in comic book form and a cartoon series helmed by the man himself, Stan Lee.  Read the entire article HERE.

Now it looks like he plans to make this character transform to a big screen adaptation of “The Governator”.

The Hollywood reporter has he whole STORY, but here are a few excerpts:

“First will come (The Governator) comic books, then a (cartoon) TV series and after that we will develop the games and then a movie,” Schwarzenegger told a packed room of international journalists at global TV market MipTV in Cannes. “Maybe then we’ll be back in Cannes for that.”’

“Schwarzenegger also confirmed he is returning to live action features, saying he will soon be “getting back in front of the camera.”

Now feast our eyes on the trailer for “The Governator” cartoon.

Could be the greatest thing ever.