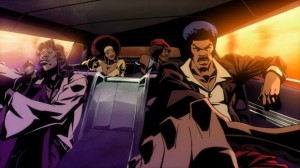 Cartoon Network’s Adult Swim has picked up a new animated series called “Black Dynamite” which is based on the 2009 film of the same name.

The series will debut in the Spring of 2012 and will feature the voice talent of Michael Jai White, Tommy Davidson, Kym Whitley, and Byron Minns who all starred in the original film.  The film will be helmed by Carl Jones (The Boondocks) and will follow Black Dynamite and his further chronicles and exploits of the central character, ex-CIA agent and full-time ladies man Black Dynamite, and his crew as they avenge the death of Black Dynamite’s brother against kung-fu masters, drug-dealing pimps and The Man and his crew. Find the whole story at Deadline.

The original film from 2009 was balls to the wall AWESOME.  I am so happy they are getting the original actors back to lend their voices.  Smart move.  Hopefully they can get Arsenio Hall to do some cameos.  This show is going to be an instant cult classic just like the film.  So Happy.

Below is the NSFW trailer for the film.

Purchase the movie below.