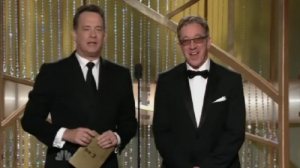 According to Deadline, Tom Hanks and Tim Allen will star in “Jungle Cruise” based on the Disney ride.  Watching the Toy Story films, you can’t help but notice the chemistry between Allen and Hanks.  Even though it is just their voice.

Writer Roger Schulman will be penning the script.  Roger wrote Balto and Shrek.

Supposedly this project has been trying to get made for a while now.  I imagine since Pirates of the Caribbean has done so well for Disney.  No director is attached yet, but I wouldn’t be surprised if Hanks would try to get the directing gig or at least he was offered the job.  This could turn out to be a very good film and story.  Maybe a live action packed adventure film with Hanks and Allen with some comedy.  Think Indiana Jones style film with those two.

I think that could be a great family adventure film.