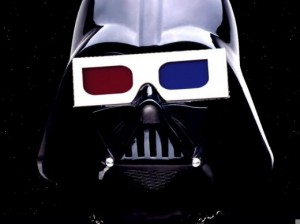 a few weeks ago, George Lucas announced that he was wanting to jump in on the 3-D craze that has hit the entertainment industry and convert all the Star Wars films to 3-D.

Well, Lucas has a release date of February 10, 2012.  It will start with Episode 1: The Phantom Menace.  And if sales are great, then he will release the rest of the films for a theatrical 3-D release annually.  That means Jedi will be released in 2017.

Here is the press release:

Lucasfilm Ltd. and Twentieth Century Fox announced today that the 3D theatrical launch of Star Wars: Episode I The Phantom Menace now has an official release date — February 10, 2012! Set against the thrilling and exotic backdrop of a “galaxy far, far away,” Star Wars is perfectly suited to the immersive 3D theatrical experience, and Episode I delivers some of the Saga’s most stunning and spectacular sequences — from the Naboo invasion to the Tatooine Podraces to the climactic lightsaber battle between Darth Maul and the Jedi.

Supervised by Industrial Light & Magic, the meticulous conversion is being done with utmost respect for the source material, and with a keen eye for both technological considerations and artistic intentions.