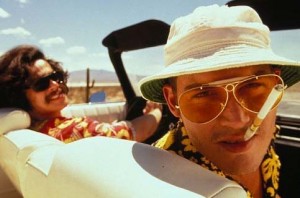 HOOOOORAY!!!! Fans of Fear and Loathing In Las Vegas can jump in the air and rejoice.  Another Johnny Depp/Hunter S. Thompson film is coming.

Film District is finally releasing Hunter S. Thompson’s Rum Diary based on his book of the same name.  It follows a journalist (Hunter) from the big city of NYC where he travels to Puerto Rico to get away from the rat race of the big city only to become involved with a married woman and her crazy husband.

Also read this great letter written by Hunter S. Thompson to the studio about not getting this film released when it should have been.

Okay, you lazy bitch, I’m getting tired of this waterhead fuckaround that you’re doing with The Rum Diary.

We are not even spinning our wheels aggresivly. It’s like the whole Project got turned over to Zombies who live in cardboard boxes under the Hollywood Freeway… I seem to be the only person who’s doing anything about getting this movie Made. I have rounded up Depp, Benicio Del Toro, Brad Pitt, Nick Nolte & a fine screenwriter from England, named Michael Thomas, who is a very smart boy & has so far been a pleasure to talk to & conspire with…

So there’s yr. fucking Script & all you have to do now is act like a Professional & Pay him. What the hell do you think Making a Movie is all about? Nobody needs to hear any more of that Gibberish about yr. New Mercedes & yr. Ski Trips & how Hopelessly Broke the Shooting Gallery is…. If you’re that fucking Poor you should get out of the Movie Business. It is no place for Amateurs & Dilletants who don’t want to do anything but “take lunch” & Waste serious people’s Time.

Fuck this. We have a good writer, we have the main parts casted & we have a very marketable movie that will not even be hard to make….

And all you are is a goddamn Bystander, making stupid suggestions & jabbering now & then like some half-bright Kid with No Money & No Energy & no focus except on yr. own tits…. I’m sick of hearing about Cuba & Japs & yr. Yo-yo partners who want to change the story because the violence makes them Queasy.

Shit on them. I’d much rather deal with a Live asshole than a Dead worm with No Light in his Eyes…. If you people don’t want to Do Anything with this movie, just cough up the Option & I’ll talk to someone else. The only thing You’re going to get by quitting and curling up in a Fetal position is relentless Grief and Embarrassment. And the one thing you won’t have is Fun…

Okay, That’s my Outburst for today. Let’s hope that it gets Somebody off the dime. And if you don’t Do Something QUICK you’re going to Destroy a very good idea. I’m in the mood to chop yr. fucking hands off.

I so love Hunter.