Get Brave and Bold With Batman: The Brave and the Bold For Your Geek Deal of the Day!!!

Today’s Geek Deal is all about the animated tv show: “Batman: The Brave and the Bold” Season One Part Two. This show is the 2nd half of the entire season one and I must say it is amazing.

There are two discs that come with this set with the thirteen episodes from season 1. 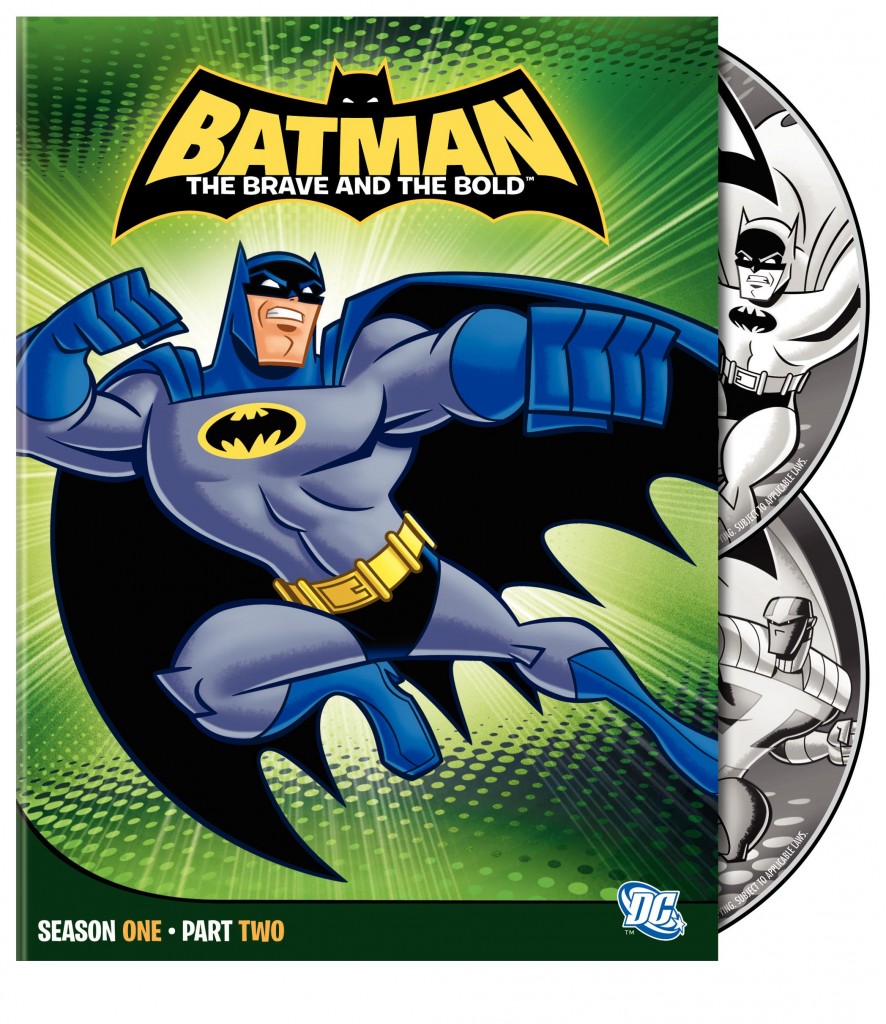 You will get the following episodes:

– Episode #14 – “Mystery in Space!” – Prequel: Bats and the Question try to catch Equinox off-balanced. Then Batman and a peculiarly despondent Aquaman catch a zeta beam to the planet of Rann to help Adam Strange hold off an army of Gordanian invaders.

– Episode #15 – “Trials of the Demon!” – Prequel: Batman and the Golden Age Flash take on the Scarecrow and the Scream Queen. Then, in Victorian-era London, Bats and Sherlock Holmes match wits as they investigate a rash of victims being robbed of their very souls. Also, the Demon Etrigan rises, and he brung his rhyming ways.

– Episode #16 – “Night of the Huntress!” – Prequel: Bats and Black Canary treat Solomon Grundy like how the Road Runner usually treats Wile E. Coyote. Then, high schooler Jaime Reyes (a.k.a. Blue Beetle) visits Gotham U. and runs into the frankly disturbing crime couple, Baby-Face and Mrs. Man-Face. Jaime also starts crushing on the badassery on legs that is the Huntress.

– Episode #17 – “Menace of the Conqueror Caveman!” – Prequel: Bats and Wildcat tangle with Bane. Then, team-up mayhem ensues as opportunistic superhero from the future, Booster Gold, tries to hang out with Batman, purely to increase his marketability.

– Episode #18 – “The Color of Revenge!” – Prequel: Batman and Robin sews up that flamboyant fiend, Crazy Quilt. In the main story, Crazy Quilt returns to plague Robin who’d struck out on his own in Blüdhaven. The Dark Knight shows up and gets all mentor-y.

– Episode #19 – “Legends of the Dark Mite!” – Prequel: Can Batman and Ace the Bat-Hound chase the dastardly Catman up a tree? Then, that other-dimensional imp (and Batman’s personal Mr. Mxyzptlk), Bat Mite, puts the Caped Crusader thru his paces. Loved it when the episode went meta with the Q & A sequence at the Batman convention.

– Episode #20 – “Hail the Tornado Tyrant!” – Prequel: Green Arrow and Bats compete to see who can first bring down the Joker. Then, the Red Tornado creates the next-generation Tornado-bot and infuses it with emotion. Uh-oh.

– Episode #21 – “Duel of the Double Crossers!” – Prequel: The Outsiders try to keep collateral damage to the city down to a minimum as they tackle Despero. Then, on Warworld, the time-displaced Jonah Hex is beholdin’ to Mongol and is forced to work for him as a bounty hunter. And then Batman gets in the way.

– Episode #22 – “The Last Bat on Earth!” – Prequel: Bats and Mr. Miracle indulge in escapism. Then Batman pursues Gorilla Grodd into a post-apocalyptic future and teams up with Kamandi, the Last Boy on Earth.

– Episode #23 – “When OMAC Attacks!” – Prequel: Batman and Hawk & Dove “finesse” a peace treaty between two warring alien races. Then, when Batman’s mission for the Global Peace Agency goes fubar, the GPA assigns the One Man Army Corps (OMAC) as his partner.

– Episode #24 – “The Fate of Equinox!” – Prequel: Two-Face flips his coin and it lands on the good side, causing him to team up with Batman against his own henchmen. Then, things take a cosmic turn as Dr. Fate and Batman go up against Equinox, who has harnessed the powers of the Lords of Order and Chaos and now seeks to remake the universe.

– Episode #25 – “Mayhem of the Music Meister!” – BATMAN: THE BRAVE AND THE BOLD… The Musical!! The Music Meister – he’s here to “settle the score” – compels our cast of heroes and nogoodniks to burst out into song. But that’s not how the Batman rolls.

– Episode #26 – “Inside the Outsiders!” – Prequel: Batman and Green Arrow take on Catwoman. Then, the Psycho-Pirate, who manipulates and feeds on emotions, messes with Batman and the Outsiders. 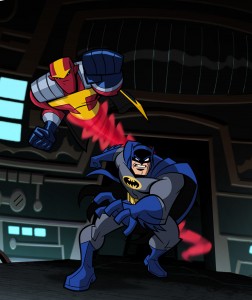 The voice talent in this show is spectacular.  You have Diedrich Bader (Office Space/Drew Carrey Show/Outsourced) lending his voice for the caped crusader himself.  He brings a no non-sense Batman to the table.  This should always  be Batman’s voice.  It is thrilling, haunting, and quite poetic at times.  John Dimmagio (Bender from Futurama) and Billy West (Fry from Futurama) also lend their voices to this outstanding tv show.  This cartoon was perfectly cast in voice talent.

The show itself is animated perfectly with rich colors and that dark aura that surrounds Batman at all times.  It is really a quite perfect match.  This being a cartoon, it really is a no holds barred depiction of Batman.  It plays to kids and adults alike.  I love how they do this.  It has some situations that play to kids as well as the mild violence and tense adult situations  for us older people.  I also enjoyed how they would show relationships with Batman between the villains and other heroes.  For example, the relationship with the older Robin and Batman was much like a real father and son and the adolescence that transpires.  It was very heartwarming and very real.

This is a great show and one you should purchase and watch.

The official synopsis is:

Justice is served as Batman swings into an exciting new era, teaming with a powerful group of DC Comics Super Heroes in this thrilling series. Through the show?s final 13 animated adventures in this two-disc collection, Batman allies with Aquaman, Plastic Man, Blue Beetle, Red Tornado, Green Arrow, Wildcat, Deadman, Bronze Tiger, and Atom to fight their enemies. The superhero squad takes on an array of evildoers ranging from mad scientists to intergalactic crooks and from power-hungry dictators to uncontrollable teenagers. And Batman encounters a new villain, the Music Meister, who is able to exert powerful mind control through song. Starring the voice of actor Neil Patrick Harris (How I Met Your Mother) as the Music Meister, the all-musical episode was nominated for an Emmy® Award for Outstanding Music Composition for a Series (Original Dramatic Score). In this cutting-edge and often funny series bringing back old-school comic book styling to crime-fighting, Batman faces any peril?including other heroes stealing the show?in his relentless pursuit of justice.

Or you can get it directly from WB for less than a dollar more.

I hope you enjoy it as much as I did.