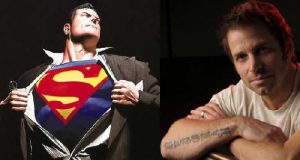 Over at the L.A. TIMES, there is a small interview with director, Zack Snyder (300, Watchmen, Sucker Punch, and Dawn of the Dead) on his next project, “SUPERMAN”.

The article suggests that the title will be “Man of Steel”, but there is still not a “set in stone” title yet.

“Literally, the one thing that everyone can start to think about is that we’re making a movie that finally goes with the approach that there’s been no other Superman movies,” Snyder said. “If you look at  ‘Batman Begins,’ there’s that structure: there’s the canon that we know about and respect, but on other hand there’s this approach that pre-supposes that there haven’t been any other movies.  In every aspect of design and of story, the whole thing is very much from that perspective of ‘Respect the canon but don’t be a slave to the movies.’”

When asked about the previous Superman film in terms of the story line tip toeing around past films and comics, being gracious as to not disturb the masses from difference, Snyder said:

“Yeah, and we’re not afraid of that at all,” Snyder said. “Our Superman, he’s got things to figure out, but he’s a physical cat.”

I think Snyder will make one amazing Supes film.  Henry Cavill is shaping up to be a great Superman and going on from Snyder’s past work, I think we will enjoy what is presented to us on screen.

I think we will be seeing some costume work very  soon too.