A New Daredevil Film is In The Works By Director David Slade!!! 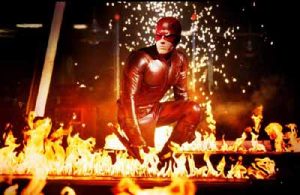 It looks like a sequel to the Ben Affleck super hero film, “Daredevil” is going to be made.  And this time it will be made by director, David Slade.

Now I was a fan of the first film for the most part.  The director’s cut of the film that was released on DVD was far, far superior to the theatrical cut of the film.  The studio execs really fucked that film up.  I enjoyed Affleck as Murdock, I enjoyed Michael Clark Duncan as Kingpin, but I did not enjoy Jennifer Garner as Elektra.  Everything about her character down to the costume was bland and not really necessary.  Every time she was on screen I was bored.  But, Collin Ferrell’s Bullseye was brilliant. I do think they have room for another film.

So now director David Slade (Hard Candy, 30 Days of Night, Twilight:Eclipse) is set to direct the sequel.  It is said to be a true origin story, but a continuation of the character from the first film.  I hope Affleck comes back as Murdock, because he really shined in that film.  And it has been almost ten years since then, and I think Ben has matured and gotten better as an actor.  I think he would do a badass job once again in the red suit.

What are your thought??