A Dumb & Dumber Sequel Might Be In Our Future With Jim Carrey and Jeff Daniels!! 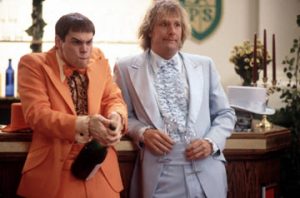 The Farrelly Bros. who brought us Dumb & Dumber, Something About Mary, and Shallow Hal, are hinting at a sequel to Dumb and Dumber.  They intend to bring back Jim Carrey and Jeff Daniels for the film.

One of the brothers (Bob Farrelly) said:

“Dumb and Dumber has run a bunch of times on TV in the states, and kids will come up and they’ll be able to quote lines from that – lines that I’ve long forgotten. If we could get those two guys back together, Jim Carrey and Jeff Daniels that might be a worthwhile sequel – and that ball is in motion. We’re starting to think about what those two dimwits would be doing twenty-years later in life, and hopefully we’ll be able to come up with something worthy of a sequel.”

This is pretty awesome news.