Superstar Jackie Chan’s 100th Film To Be Released in The USA!!!

Let me first stand up and applaud Jackie Chan.  100 films.  That is a big feat.  Jackie has entertained me and all of us for many years.  In his prime he was the Drunken Master and Supercop and who could forget the Rush Hour films, the comedy and action he brought to that franchise was amazing.  I have loved being entertained by Jackie Chan for years and years now and am super excited to see his 100th film.

Chan was also great in the new Karate Kid film.  He brought a lot of heart and soul to that role.  Now you can say that you haven’t enjoyed some of Jackie’s work like the Tuxedo or The Spy Next Door, but I will say this.  He is one hell of an entertainer and martial artist master and he still continues to entertain me and all of us still to this day.  Bravo Jackie. 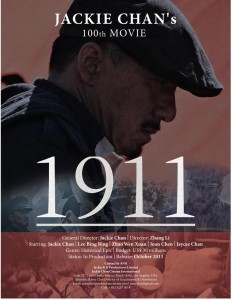 Here is the synopsis:

Starring Chan and co-directed by the star and Zhang Li, 1911 tells the story of the founding of the Republic of China when Sun Yat-sen’s forces overthrew the Ming Dynasty. Sun is played by look-alike Chinese actor Zhao Wen Xuan. Li Bingbing and Joan Chenalso star. The film started shooting in September and will be released in October 2011.

I cannot wait to see this.