Michael Bay Will produce the film adaptation of the Comic Book, “Zombies Vs. Robots!” 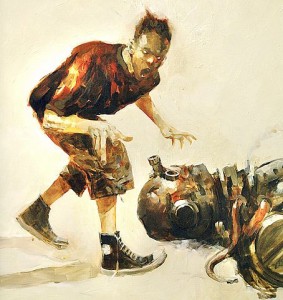 At least Bay won’t be directing the film.  But this is as cool of news as you will ever get.  The comic book, “Zombies VS Robots” has been picked up by Michael Bay’s company, Platinum Dines and Sony Pictures to adapt into a feature film according to Deadline.  Buy the comics HERE.

The story is by Chris Ryall and Ashley Wood.  I loved this comic series.  Short series, but great.  They also made a Zombies VS Robots VS Amazons.  Maybe that will be the sequel to the film.??

But the artwork and story are amazing and it works in comics definitely.  Not sure how it will turn out in a live action film.  The book is about the last sole survivor on Earth which is a girl and she is protected by a group of robots from hungry zombies.

What do yall think?  Casting??