How To Train Your Dragon Sequel Details Emerge!!!! 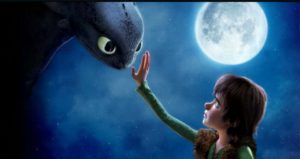 The director Dean Deblois had this to say:

“It’s going to be quite epic. We are treating How To Train Your Dragon as the first act in a much larger story. As we head into this one, the world expands. Everything is much bigger with still the heartfelt qualities that made the first one resonate so much with audiences. There are no longer restrictions to this tiny island in the North Sea. They have the entire Northern hemisphere within their grasp.”

“There will be some new dragons and maybe some new characters. It’s the further adventures of Hiccup on his journey of becoming a man and the ultimate leader of the Viking clan.”

This shaping up to be great, but like most sequels, if you put way too much money and have too many story lines, it will fail.  Let us hope they don’t do this.