Check Out Master of Voodoo and Vampirium by the up and coming Author, Justin Cline!!! 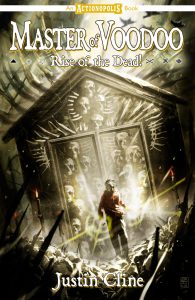 If you are looking for an excellent read full of adventure and black magic, then please download these two titles.  These titles are put out by ACTIONOPOLIS which is a publishing company that has worked with DC COMICS, Marvel, Cartoon Network, and Komiwerks.  The two titles are written by Justin Cline with art by Shannon Eric Denton.

Master of Voodoo is about: “Against his mother’s wishes, Gibson Cross secretly meets his great grandmother Evangeline, who informs him of his long family history with voodoo. He has inherited the ability to communicate with the Lwa, immortal spirits capable of giving him otherworldly powers to use for good. But when the forces of black magic kidnap his family, Gibson must use these untested powers and team up with his brilliant young friend, Rav Wallace, to not only save Gibson’s parents and young sister but their entire town as well.”

Vampirium: Millennium of Shadows is about: “When Wyatt Kent discovers his troublemaking cousin Kody is coming to live with him, he’s convinced his life can’t get any worse. Boring new town. No friends. Crazy nosebleeds. Of course, this is before a thousand year old vampire informs him that these same nosebleeds are a genetic trait, marking him as a half-blood descendant of an ancient race known as the Vampirium. Imbued with a new ability to travel through shadows, Wyatt must work alongside Kody in order to defeat an ancient evil before they can rise to power and wipe humanity out once and for all.”