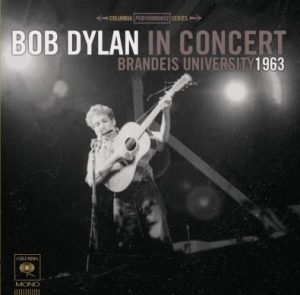 Columbia Records and Legacy Recordings are set to release the stand-alone “Bob Dylan In Concert: Brandeis University 1963” to a wider audience on April 12, 2011 on CD, Vinyl LP and Digital formats.

The concert tape, owned by Rolling Stone co-founder Ralph J. Gleason, sat largely forgotten on a shelf for over 40 years. “It had been forgotten, until it was found last year in the clearing of the house after my mother died,” said Toby Gleason, Ralph’s son. “It’s a seven inch reel-to-reel that sounds like it was taped from the mixing desk.”

“It’s a small miracle this recording exists,” Gray writes in his essay. “Clearly a professional recording…. (t)he Bob Dylan performance it captured, from way back when Kennedy was President and the Beatles hadn’t yet reached America, wasn’t even on fans’ radar…. It reveals him not at any Big Moment but giving a performance like his folk club sets of the period: repertoire from an ordinary working day….Dylan has leapt a creative canyon with this material….This is the last live performance we have of Bob Dylan before he becomes a star….”

Pre-orders for the live concert are now available trough bobdylan.com, and will also be available at independent music retailers.