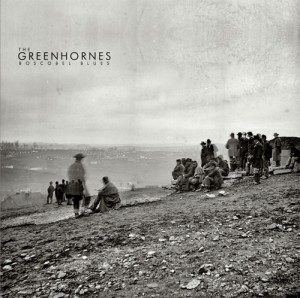 I never really thought much about joining music fan clubs the many years I’ve been collecting music, but I recently joined Jack White’s “Third Man Records Vault” fan club service a few months back, perhaps out of sheer jealously about the rare goodies I was missing out on. Thankfully, I wised up in plenty of time to be introduced to The Greenhornes.

The latest Vault subscription service package included some really sweet goodies, as have been the case since The Vault service launched a couple of years ago. Included is the 12″ gem from The Greenhornes, called “Boscobel Blues”, a collection of ‘proper demos for what would later become the “East Grand Blues” EP’ released in 2005.This release of raw and electrifying 1960s-esque pounding garage rock, mixed by Jack White himself, really showcases the band in awe inspiring form. In fact, a couple of the tracks on this record show up on The Greenhornes’ latest studio release, “★★★★”, and gives you a bit of an idea how long that record was in the making. Their killer cover of James Brown’s “I’ll Go Crazy” is certainly worth getting your hand on, as well as hearing soon-to-be classics “Pattern Skies” and “I Need Your Love”. For a small taste of their sound, click here.

I’ve essentially listened to my “Boscobel Blues” record around ten times since receiving it in the mail yesterday, probably ruining the collector resale value with each revolution. But you know what? Fuck it…what good is music if it’s not listened to? To some, $60 per quarter for a premium Vault subscription might be a little steep, but if you are a champion for the work of Jack White and his little ol’ record label that can, you’re more than happy to contribute to the art.

For the next super installment of The Vault subscription service members need to have their subscriptions paid up by January 31st. Trust me, you’ll want to get your hands on the next Vault releases!

~Jonathon Kimbrell is a visual artist and music writer based in Dallas, TX. You can read his weekly blog, “Classic Waxxx“, dedicated to rediscovering old and forgotten vinyl record treasures.