“Gotham High” The Animated Batman Show That Never Came To Be!!!

Yes.  “Gotham High” is real.  This was pitched as a tv show and it got lost in the cards over at DC/Warner Bros. from all the Batman projects that are going on.  Basically it is a Batman cartoon with all the Batman universe in it, but it is set in high school and all the heroes and villains are the students that go there.  It sounds a lot like that MTV cartoon they had severl years ago called CLONE HIGH where a scientist cloned a ton of historical figures that were high school students and they all went to CLONE HIGH.  It was a hilarious show, but was only on for one season die to the huge controversy it made.  That photo above is Clayface, Two-Face, The Penguin, Killer Croc, The Riddler, Batgirl, Batman, Scarecrow, Catwoman, Joker, Harley Quinn, Poison Ivy, Bane and Mr. Freeze. As teenagers. It’s a promotional image from Gotham High, a show that was being developed by comic book  artist & author team Celeste Green and Jeffrey Thomas based on an image they sent to DC.

Here is how Celeste and Jeff described their show:

We all go through incredible changes as teenagers: growth spurts, bad skin, a sudden insatiable need to uphold justice and avenge your murdered parents…. Well, that is if you’re Bruce Wayne. As if being a freshman at Gotham High wasn’t tough enough, Bruce’s insomnia and technological fascinations are taking their toll. Instead of spending his time studying, he has begun to obsess over an emerging personality trait: Batman. But under the watchful eye of his guardian and steward, Alfred Pennyworth, Bruce is forced to put his intelligence to good use: graduating high school. But given his classmates, can Bruce survive Gotham High?

Here are some pictures of what the show was going to be.  ENJOY. 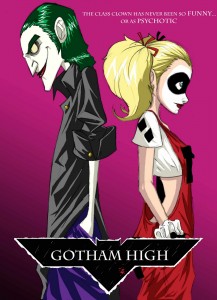 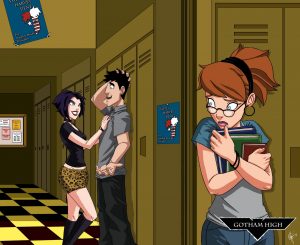 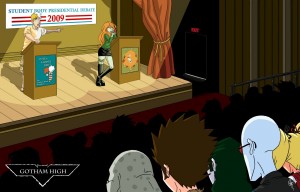 Read more about the show from the blog of Celeste and Jeff HERE.